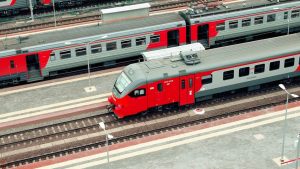 Transmashholding has developed and tested an innovative train noise reduction system for air conditioning system which will be installed on the upcoming metro carriages, locomotives, EMUs, and other rolling stock.

The innovation is a result of joint research and development efforts by TMH Engineering and Andreyev Acoustics Institute, a leading Russian research facility dedicated to the study of acoustics.

The innovative train noise reduction system is formed by a set of proprietary assemblies located in the airducts of a vehicle. While forming an unobstructed flow of air, they block acoustic radiation produced by the HVAC fans.

During the tests, TMH has measured the noise levels with a specialised control equipment. They showed that the loudness of the air conditioning inside a vehicle was reduced by 10 dBA, which is 10 times lower noise pressure level in comparison to a version of the tested vehicle without the solution onboard.

The system will increase passenger comfort and help mitigate acoustic strain for locomotive crews. It does not require a separate certification and will be certified as part of the rolling stock that carries it.

The new system may be installed on the new trains and cars which are scheduled to be delivered this year under several contracts recently signed by the Russian manufacturer.

In addition, TMH will refurbish 40 metro cars for Bulgaria’s capital, Sofia. The modernisation process includes almost all the car’s equipment, as well as the interior and exterior. Initially, 24 modernised cars will be delivered, followed by another batch of 16 cars.