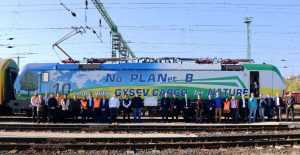 Stakeholders of the corridor, including representatives of the European Commission, the Hungarian Ministry for Innovation and Technology and from cooperating Rail Freight Corridors and project partners were able to accompany the train in two passenger coaches attached to it.

The rail freight sector needs to better adapt to market demands and customer expectations which can be achieved by a timely deployment of the TEN-T minimum infrastructure standards which include the requirement to allow the operation of 740m long freight trains on the Core Network by 2030, the TEN-T Coordinator Péter Balázs from the European Commission (DG MOVE) explained during the International Rail Freight Workshop organised in Sopron.

He also highlighted the indispensable role of rail freight for being able to meet the ambitious targets of the European Green Deal, with the objective of reducing CO2-emissions by 55% until 2030 and reaching carbon neutrality by 2050.

“Hungary is strong engaged for the development of EU Rail Freight Corridors and for this will allot important investments for the rail infrastructure to eliminate bottlenecks, increase capacity and allow more efficient rail freight operations. In addition, a future V4-high-speed line in Hungary can help to free up capacity for freight on the conventional network, allowing the rail system to accommodate expected growth in both passenger and freight traffic,” Szilvia Mogyorósi, the Head of Department at the Hungarian Ministry for Innovation and Technology said.

The TEN-T Demo-Train is an important project to underline the need to develop the rail freight services and provides an opportunity to “increase the competitiveness of rail freight which must include as key elements the realisation of economies of scale, in particular through longer trains, and the full exploitation of the potential of digitalisation and automation in rail freight, two fields in which Gysev Cargo strongly engages in,” János Boda, the CEO of Gysev Cargo said.

Saxon Ministry for Regional Development in Germany is the lead partner of the CORCAP project which includes different pilot actions carried out by the project partners.

Following the workshop’s feedback, further analyses will be made by the involved parties. The aim is to provide better conditions for more efficient and competitive rail freight on key routes for freight, with a particular focus on enabling the operation of longer trains.