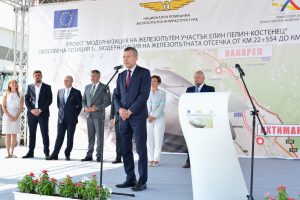 The tunnel will be 7 km-long and is the largest rail tunnel in Bulgaria and the Balkans.

The 20 km-long Elin Pelin – Vakarel rail section will be reconstructed under an investment which is supported by the European Union through the Transport and Transport Infrastructure and Transport Connectivity operational programmes 2024-2020.

The modernisation of the rail section between Elin Pelin and Vakarel also includes the construction of a new station in Elin Pelin, the cinstruction of Pobit Kamak bus stop and Vakarel stop which will be linked to the train station where a 1.8 km underpass and an overpass will be constructed. The line will be electrified, and the signalling and telecommunication system will be replaced.

The works are performed by the Cen-Duy Railway Elin Pelin consortium comprising Cengiz and Duygu companies from Turkey, under a BGN 498.8 million (EUR 255 million) contract. The construction will be implemented within four years.

The rail line “is part of the East – West rail corridor and it is of extremely importance for Bulgaria and neighboring countries on the Corridor No. 8. The technical and operational challenges for the constructor are extreme, as this lot is the most difficult of the whole section,” Todorov said at the ceremony.

Following the completion of the works, passenger trains will run at a speed of 160 km/h, while freight trains will be able to run at 120 km/h.

The minister says that currently, the government is implementing rail projects worth BGN 1.1 billion (EUR 562.4 million).