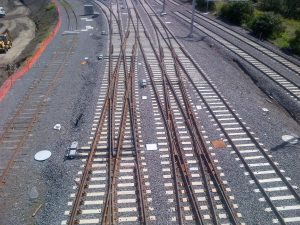 “This order is the biggest in the history of Vossloh in Australia. It highlights our strong market position and the increasing importance of the Australian market. We are honored that our long-standing customer ARTC has once again placed its trust in us and that we can contribute to the biggest rail infrastructure project for freight transport in Australia,” Oliver Schuster, Chief Executive Officer of Vossloh AG said.

Under the contract, the deliveries are spread over five years, with the first switch systems expected to be delivered in March 2021. The deliveries are reported as orders received at the time they are called off.

“The Australian Government’s investment in Inland Rail is delivering a world-class freight backbone that will stimulate economic growth, build supply chain resilience and enhance market access. But local industries and suppliers will benefit right now as shown by the signing of this major contract. Over the next five years, Vossloh will need 32 additional people to support the design and manufacture of more than 200 turnouts primarily in Castlemaine in central Victoria,” Deputy Prime Minister and Minister for Infrastructure, Transport and Regional Development Michael McCormack said.

The 1,700 km-long freight line will connect the two Australian cities via regional Victoria, New South Wales and Queensland. Inland Rail project covers the construction of new rail sections totalling 600 km and the modernisaion and improvement of 1,100 km of rail sections.

The first section of Inland Rail, between Parkes and Narromine, has been completed. This project covered upgrade works for the existing 98-km line and the construction of a 5.3 km rail section near Parkes, known as the North West Connection, which links Inland Rail with the existing Broken Hill rail line to Perth.