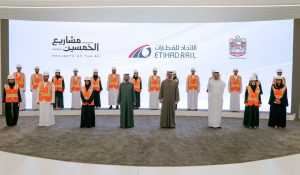 The UAE Railways Programme has been announced on December 5, 2021, as an integrated strategy for country’s rail sector for the coming decades. It will determine a reduction of 70-80 per cent of carbon emissions over the next 50 years.

The strategy was unveiled in the presence of Sheikh Mohammed bin Rashid Al Maktoum, the Prime Minister and Ruler of Dubai, Sheikh Mohamed bin Zayed Al Nahyan, Crown Prince of Abu Dhabi and Deputy Supreme Commander of the Armed Forces. A special event was organised at Dubai’s EXPO 2020 highlighting the objectives of the programme and the phases of Etihad Rail project, which connects Ghuwaifat on the border with Saudi Arabia to the port of Fujairah on the Eastern Coast.

The plan worth AED 50 billion (USD 13.6 billion), 70 per cent of which targets the local market, includes a national network of railway projects that link the emirates and the key cities of UAE.  “The Etihad Rail is the largest project to consolidate the strength of the union for the next fifty years,” the Prime Minister said.

The programme falls under the ‘Projects of the 50’ which is a series of developmental and economic projects that aim to accelerate country’s development.

The UAE Railways Programme includes three key projects with the first on covering the freight rail sector. The second project involves the rail passenger service market under which 11 cities from Al Sila to Fujairah will be connected. By 2030, the number of passengers is expected to reach more than 36.5 million annually.

The third pillar of the strategy considers the integrated transport service sector, where an innovation centre will be established to ensure the integration of the smart transport solutions. A light rail network will be connected to the rail passenger system to facilitate transport inside UAE cities.

The new plan also includes the development and deployment of smart applications and solutions for all kind of transport services.

Under the strategy, Etihad Rail expects to provide more than 9,000 jobs by 2030.

The first phase of the rail network has been operating since 2016 and currently, Etihad Rail is implementing the second stage.