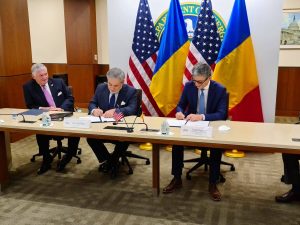 Romania and the Unites States of America have signed an intergovernmental agreement that includes the construction of Gdansk-Constanta rail and road connection, and the implementation of a civil nuclear power programme, under a “huge investment” provided by the U.S.

“Romania is taking a huge step forward in the development of its strategic partnership with the United States of America, in terms of the energy component, namely cooperation in the civil nuclear field,” said Minister Popescu.

“We will initiate a new project for Romania and together with Poland we will construct a rail and road connection between the city of Constanta with Gdansk, providing the transport link between the Black Sea and Baltic Sea. This infrastructure project is a huge benefit for the economies of Romania and Poland, as well as for the ones within the region,” Adrian Zuckerman, the U.S. Ambassador to Romania said at the signing ceremony.

The agreement will lay the foundation for Romania to use U.S. expertise and technology with a multinational team building reactor Units 3 and 4 of the Cernavoda Nuclear Power Plant and refurbishing reactor Unit 1. This agreement underscores the importance of the strategic partnership between the United States and Romania and their mutual commitment to energy security in the region.

“We have identified the US interest for a USD 7 billion investment for the development of energy and transport infrastructure involving the road and railway projects. A Memorandum of Understanding was signed with the U.S. EXIM Bank,” Virgil-Daniel Popescu, the Romanian Minister of Economy, Energy and the Business Environment said during the signing ceremony in Washington.

The Gdansk-Constanta rail project is part of the Three Seas Initiative consisting of the modernisation of the existing railway infrastructure as well as the construction of new rail sections to ensure a direct connection between the two port cities.

The so called “Rail 2 Sea” project involves the modernisation of more than 3.600 km of rail route which will provide the shorter transport connection from Asia to the Central and Eastern European countries.

The new rail connection will ensure the civilian-military dual-use of transport infrastructure on the route and between the two ports.

This project involves the modernisation of the existing railway corridors for both commercial and military use to transport the military equipment. The connection will cross Poland, Slovakia, Hungary and Romania.

“I welcome the US initiative to support and provide the investment for the development of the economy, the energy security and ensure a better transport connection through the road and rail infrastructure. The two proposed projects – Rail 2 Sea and the Via Carpatia [a road project] will benefit a real support for infrastructure development that will link Constanta and Gdansk together with the regions of the Black Sea and Baltic Sea,” the Romanian Transport Minister Lucian Bode said.

In 2018, Romania has signed three MoUs to establish and implement the proposed projects under the Three Seas Initiative.

Also, in 2017, the Polish and Romanian railway freight operators, PKP Cargo and CFR Marfa, and Gdansk Port and Constanta Port signed an agreement to develop the transport sector between the two destinations, which includes the Gdansk-Constanta rail connection.