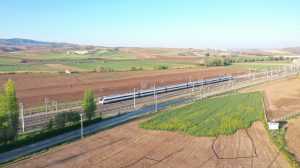 The European Bank for Reconstruction and Development (EBRD) is providing an additional loan of EUR 150 million to the Turkish government for the construction of the Ispartakule-Cerkezkoy section part of Halkali-Kapikule railway.

The EBRD financing was approved by the bank’s board of directors on 10 November 2021 and signed earlier this week.

“We appreciate the EBRD’s support and contribution to the Ispartakule-Çerkezköy railway line project, the first public project financed by the bank in the field of transport. It is expected to improve Turkey’s internal and cross-border connectivity and is also an important opportunity to nurture our productive partnership with the EBRD for the future,” Lütfi Elvan, Turkey’s Minister of Treasury and Finance, said.

The Asian Infrastructure Investment Bank (AIIB) has proposed a EUR 300 million parallel financing and the Turkish government will provide the remaining funds needed for the EUR 640 million infrastructure project.

The project is expected to finance the construction of 67 km of new double-track, electrified, high-speed railway from Ispartakule station to a location adjacent to the east of Cerkezkoy station, approximately 1 km from the centre of Cerkezkoy. The line is designed to allow trains to run at 200 km/h and is equipped with ERTMS Level 1 and modern power supply system and auxiliaries.

The Ispartakule-Cerkezkoy railway section will be tendered and built in line with the EBRD’s procurement rules and environmental and social standards.

The works for the 229 km Halkali-Kapikule railway project cover the construction of a 135 km of new line and the modernisation of 95 exiting section which will be also doubled. The project consists of two parts which include the Halkalı-Çerkezköy and Çerkezköy-Kapıkule sections. The construction of the 153 km Çerkezköy-Kapıkule section is carried out with the co-financing of the European Union and Turkey, while other 76 km sections will be constructed simultaneously by Ministry of Transport with national budget facilities.

The project was launched in October 2019 and is implemented into two phases. The Ispartakule-Cerkezkoy rail section is part of the second phase of the project also covering the 10 km Halkali – Ispartakule section, funded by the Turkish Government.

Under the Pre-Accession Assistance 2014-2020, the European Union has announced it will provide a EUR 275 million grant for the construction of Cerkezkoy – Kapikule section.

The entire line is part of the Orient/East-Med Corridor and it will provide transport connection from Istanbul to Kapikule towards Bulgaria, via Svilengrad.

The line is expected to be inaugurated in 2024 and will provide a capacity for 54 train pairs a day.