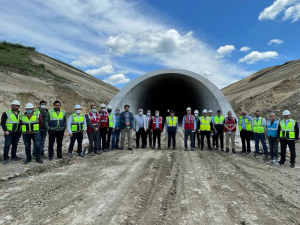 Turkish Deputy Minister of Transport and Infrastructure Enver İskurt and the General Manager of TCDD Ali İhsan Uygun have paid a working visit to assess the construction of Çerkezköy – Kapıkule rail section, part of Halkalı – Kapikule rail project. The project of the rail section reached a 36 per cent physical progress. This covers the construction of a 153 – km double track line, 53 underpasses, 59 overpasses, 16 railway bridges, two tunnels, 194 culverts and three viaducts. The project also includes electrification works and the installation of signalling systems (ERTMS/ETCS Level 1). In the Kuzucu village area, the works are simultaneously performed to build the tunnels, culverts and other bridges.

The rail line will allow trains to run at a maximum speed of 200 km/h and will reduce the travel time from currently eight hours to 3.5 hours, connecting Edirne, Kırklareli and Tekirdağ to the high-speed rail network. The capacity of the line will also increase by four times.

According to the estimations, the freight transport on the line will increase from 1.53 million tonnes to 9.6 million tonnes per year and the passenger ridership will reach 3.4 million, from currently 600,000 passengers.

The Halkalı – Kapikule rail line will have a total length of 229 km, providing Turkey rail access to the Trans-European Transport Network (TEN-T) through Bulgaria. The line is part of the Orient/East-Med Corridor. 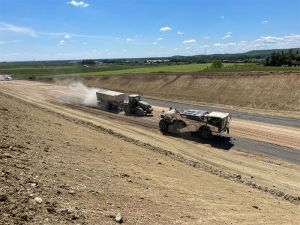 EUR 1 billion is the total value of the project. In 2019, the EU has announced a EUR 275 million grant that supports the implementation of the project and is provided to Turkey under the 2014-2020 Pre-Accession Assistance (IPA) programme.

The project is constructed into two phases. The Cerkezkoy – Kapikule section is funded by the EU and is constructed by a consortium comprising Gulermak and Alsim Alarko, while the Halkali – Cerkezkoy rail section is to be built under Turkish funding. The second phase is divided into two sections: the Halkali – Ispartakule and Ispartakule – Çerkezköy, this last section covering the construction of a 67-km double-track electrified line.

The construction works were inaugurated in Edirne in 2019 by the Turkish Ministry of Transport and the European Commission. The entire line is expected to be completed next year.

To have increased access to the European rail network, the Turkish and Bulgarian rail companies signed an agreement to modernise the Plovdiv – Istanbul line which includes the Svilengrad – Kapikule rail section.