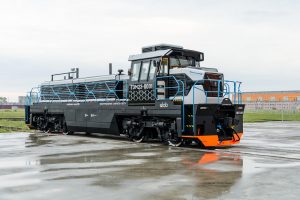 The diesel locomotives will be tested at the Russian Railways’ Research and Rolling Stock Design Institute (VNIKTI) in Kolomna on the 40 km test track. The specialists will check and appraise the traction and energy, thermal engineering system, environmental and sanitary characteristics of locomotives, and will also evaluate the functional safety and other parameters.

The successful completion of the tests will make it possible to obtain a certificate of compliance with the technical regulations of the Customs Union and, accordingly, to start selling this series of locomotives to customers.

The locomotive is equipped with modern diesel engines complying environmental requirements being more energy efficient and lower in emissions and noise compared to the previous generations. Also, a dual-diesel traction power provides fuel and oil savings in comparison with the mass-operated TEM18DM locomotive. Depending on operating conditions, the new locomotive can save up to 30% fuel consumption.

The design of the first TEM23 diesel locomotive has been developed at the National Center for Industrial Design and Innovation 2050.LAB and its exterior design considered the principles of TMH brand DNA. The TEM23 was developed by TMH Engineering designers.

At the beginning of 2022, the TEM23 diesel shunting locomotives underwent a trial run at the Bryansk-II depot as part of preliminary tests.In total, they have accumulated about 450 hours each.The result of the successful completion of this stage was the assignment of the design documentation. Now all structural elements and systems of the diesel locomotives will have to withstand a much larger and more detailed test.