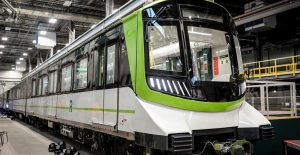 In 2018, PMM consortium, comprising Alstom and SNC-Lavalin was awarded the contract on the supply of rolling stock and systems and operation and maintenance for the REM system. To date, Alstom has delivered four cars of the 212 Metropolis vehicles forming 106 trains that will operate the new transport system.

Over the coming weeks, the first cars will travel along a 3.5-km rail section from the Brossard station to just before the Panama station, which is a ‘representative segment’ since it reproduces all of the system components that will be found on the REM nework and allows for testing of various elements of the network. Over a 13-month period, the entire system will be tested, from stations and platform screen doors to catenary, rails and the automated system.

The cars will also be put through their paces during static tests of the metros, the equipment and their features in one of the best climatic chambers in the world in Vienna. During these tests, the cars will be subjected to major temperature fluctuations and also to extremely low temperatures. 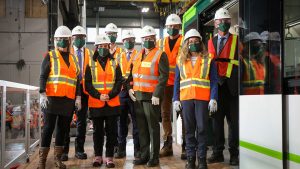 The REM car for Montreal was designed according to the specific requirements including its interior and exterior design, capacity, and accessibility as well as to the needs of the climatic conditions, being adapted to city’s climate of hot, humid summers and very cold winters. The cars will form a single uninterrupted train for passengers, serving the mobility of Greater Montreal. The exterior livery, chosen by the public, was inspired by the Samuel-De Champlain Bridge and was designed to blend into the Montreal environment, offering passengers breath taking views via panoramic windows and large bay windows at either end.

The REM cars will be 76.2m-long at peak hours and have a width of 2.94m. The train has a maximum capacity of 780 passengers with 128 seats. They are designed for an average speed of 51 km/h. 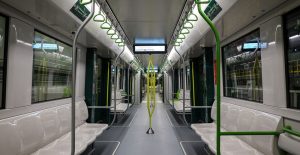 The trains will be air-conditioned in summer and heated in winter. A Wi-Fi network will be accessible so passengers will also be able to catch up on your favourite TV shows during your journey.
When operational, each departure will use a four-car train at peak hours and two cars during off-peak hours to save energy.

REM system will be one of the world’s largest automated transport networks, benefiting GoA4 system advanced automation technology. The 67-km network will be served by 26 stations connecting downtown Montreal to the South Shore, the North Shore, the West Island and the Montréal–Trudeau international Airport.

Currently, the REM construction is spread out over more than 20 construction sites across the Greater Montreal area. Major milestones were also reached this year, with the launch of Alice, the tunnel boring machine, toward the airport and the arrival of the first four REM cars.