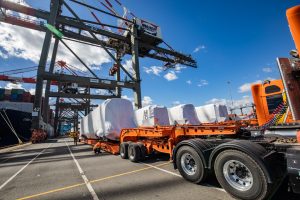 The first four of the 212 Metropolis railcars for Montreal REM have arrived in the city. After a 23-day sea journey, the first cars arrived at the New York – New Jersey port, a regular shipping line, at the beginning of October. The next deliveries are scheduled for 2021.

Each Metropolis car was unloaded at the port with lifting systems and then placed on a railed trailer specially designed to transport train cars. They were transported separately.

The Metropolis cars travelled approximately 800 km on North American roads, between New Jersey – New York and arrived at the maintenance workshop in Brossard, in Greater Montreal area. They crossed the roads of the State of New Jersey, New York and Quebec after crossing the Lacolle border crossing.

The cars manufactured by Alstom will be inspected and assembled in two 2-car trainsets and they will be prepared by Groupe PMM Canadian teams for the upcoming testing period.

The new cars will be unveiled to the public a little later this fall.

In 2018, Groupe des Partenaires pour la Mobilité des Montréalais (PMM), an Alstom-led consortium with SNC-Lavalin and CDPQ Infra signed a contract to deliver the complete automatic and driverless light metro system, including the rolling stock and signalling system, as well as operation and maintenance services. EUR 1.8 billion was the total value of the contract, of which EUR 1.4 billion is Alstom’s share.

Under the contract, Alstom will deliver 212 Metropolis metro cars that will form a 106 two-car train fleet.

The production of the railcars for Montreal REM began in October 2019. The REM trains are  fully automated and they will operate on the Réseau express métropolitain LRT network in Montreal. When completed, REM will be one of the world’s largest automated transport networks comprising a 67 km-long network served by 26 stations. It will provide transport connection between the downtown Montreal to the South Shore, the North Shore, the West Island and Pierre Elliott Trudeau International Airport.

The first trains are expected to enter operation in 2021 on the LRT section from the South Shore to Bonaventure-Central station. Then, the other branches of the network will be gradually put into service in 2022-2023.

The construction works for the Montreal Réseau express métropolitain network were launched in 2018 and they were suspended due to COVID-19 pandemic, but they were resumed in May 2020.