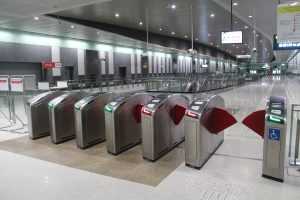 Under the contract, Thales will modernise and standardise 1,350 automatic fare collection gates on the North-South, East-West, Circle Lines as well as the upcoming Jurong Region Line in the next 7 years.

Ergonomically designed to cater to the needs of a diverse demographic, the future AFC gates will come with standardised slimmer swing flaps to allow all commuters to commute with ease and are equipped with contactless technologies.

The North-South rail corridor is the first MRT line in Singapore. The 27 stations along the 45 km line serves a large number of mature residential estates and takes commuters from Jurong East to Marina South Pier. Along its route are eight interchanges that connect the NSL to the East-West Line (EWL), Circle Line (CCL), Downtown Line, North East Line (NEL) and Bukit Panjang LRT.

The East-West mass rapid transit line is corssing Singapore from Tuas Link to Pasir Ris along a 57 km corridor with 35 stations, representing the longest train line in operation in Singapore. The line is providing transport connection between Changi Airport to recreational spots in Pasir Ris.

35 km served by 30 stations create the Circle Line (CCL) which is Singapore’s first medium-capacity line and will become a complete circle in 2025 with the opening of CCL6, which comprises three stations connecting Harbour Front to Marina Bay. The tunneling works for the 4-km extension in the southern part of the line started in 2019. CCL is country’s second train line after the North-East Line to be completely automated and driverless.

Jurong Region Line (JRL) will provide increased transport connectivity in western Singapore. The 24 km-long line will be served by 24 stations including three interchange stations at Boon Lay, Choa Chu Kang and Jurong East MRT stations. The line will be operated by 62 three-car driverless trains that can be expanded to four-cars as commuter demand increases. The construction works are ongoing, and the line is expected to be pened in 2029. This year, LTA has awarded China Communications Construction Company a contract for the construction of the Jurong East Integrated Transport Hub.