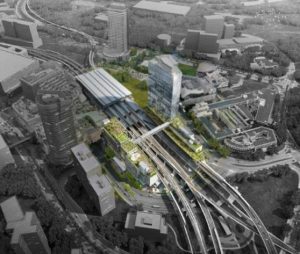 The hub will feature a 27-storey tower block connected by a 90m-long sky bridge to an eight – storey podium block. The development will have offices, public facilities as well as retail spaces.

The hub comprises community and civic institutions, an office tower and a bus interchange. With its opening, commuters in the area can look forward to direct connectivity and more convenient transfers between the North-South and East-West Lines and the future Jurong Region Line at the Jurong East station.

Like all LTA’s integrated transport hubs, the new one will also have incorporated inclusive facilities, including barrier-free alighting areas and toilets, priority queue zones with seats, and a nursing room. With the ITHs, commuters can easily run errands and shop conveniently and comfortably, before transferring to their connecting buses or trains.  This is part of the Government’s efforts to create a more caring and inclusive public transport system.

The construction of the Jurong East Integrated Transport Hub is expected to start in the second quarter of this year and will be completed in 2027.