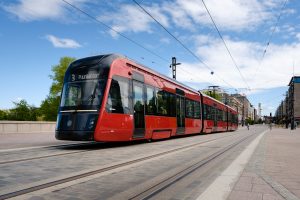 Tampereen Raitiotie, the operator of Tampere Tramway awarded Škoda Transtech a contract for the supply of five additional ForCity Smart Artic trams as part of the contract signed in 2017. EUR 34 million is the value of the new ordered trams which will be delivered in the second half of 2024. They are identical to the 20 light rail vehicles delivered in 2020-2021.

The Škoda ForCity Smart Tampere X34 is a low-floor, spacious, air-conditioned, modern light rail vehicles designed specifically for the demanding Nordic conditions. Designed for a track gauge of 1435 mm, the two-way tram is 37.3 m long, has a completely flat floor. The vehicle has a capacity for up to 264 passengers and is easily accessible for wheelchairs and prams.

“ForCity Smart Artic Tampere (Tampereen Ratikka) is the largest tram car in terms of size produced in the Nordic countries. In addition to its size and intelligent features, it is also exceptional because it was designed in collaboration with the people of Tampere. The cars have proven to be reliable in operation and we are pleased to continue our good cooperation with the Škoda Group,” Pekka Sirviö, the CEO of Tampereen Raitiotie Oy said.

Tampere Tramway is being built in two stages. The first stage was implemented from 2017 and the route between Pyynikintori and Hervantajärvi and from the University Central Hospital to Sorin Square became operational in August 2021. Line 1 from Sorin aukio to Kaupin kampus includes 9 stops. The Line 3 provides 19 stops on the route between Pyynikintori and Hervantajärvi.

The second stage of the project covers the construction the line from Pyynikintori to Lentävänniemi and a branch line the Ylöjärvi direction between the Hiedanranta and Lielahti is planned to be constructed. Theordered  trams will operate on this new tram section expected to enter passenger operation in 2024-2025, when all the 25 new ForCity Smart Artic trams will operate the tram network of Tampere.