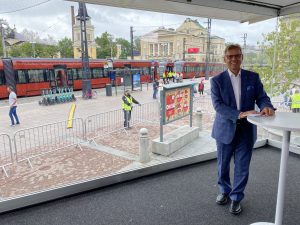 Tampere tramway has been officially inaugurated on August 8, 2021, after 4 years of hard work, with transport services begin ahead of schedule which was set for the end of this year. In May, the city started the trials and announced that the line will enter passenger operation in August.

“In addition to being a public transport solution, the tramway is a very big part of urban development. The tramway is part of Tampere’s big change, which aims to curb climate change and increase the share of sustainable modes of transport,” city’s Mayor Lauri Lyly said.

The 15.7 km first phase of the project covers two sections which are linking the city centre, Hervanta, a neighbourhood, with a branch the Tampere University Hospital. The first line runs from Pyynikintori to Hervantajärvi, while the second offers the connection with the University Central Hospital to Sorin Square, and a depot at Hervanta.

The 37.3 metres-long tramway is an investment in a cleaner and easier everyday life. The tram cars will operate on green electricity, and each one can carry the same number of passengers as three buses. This will reduce the amount of traffic, improve air quality and make the city centre more pleasant. “The tramway is part of a major change in Tampere, the goal of which is to reduce climate change and increase the use of sustainable modes of transport. Other actions in addition to the tramway include developing local train traffic, city bikes, a one-hour train connection to the capital region, and ensuring smooth car traffic,” the Mayor explained.

The ForCity Smart Artic trams are manufactured by Škoda Transtech at its Otanmäki factory in Kajaani and Idis Design Oy was responsible for the car design. Tampere will receive a total of 20 tram cars for the first section. Tampere’s tram car is accessible, spacious, air conditioned and specially designed for northern conditions. Tampere’s tram car is the largest ever manufactured in the Nordic countries.

EUR 219 million was the original value of the construction of the first section of Tampere tramway performed by Tramway Alliance that also implemented parallel projects completed in conjunction with tramway construction such as water services work, cable piping, renewing street structures, and building new cycling routes.

“Sitting at the same table from the development phase onwards has increased trust between all the partners. Commitment to joint targets from the very beginning plays a key role in project success. After all, the slogan for the alliance is “we win together, we lose together”, Pekka Sirviö, CEO of Tampere Tramway said..

Construction and operation of the railway has been implemented through an alliance model. Tampere Tramway, a company owned by the City of Tampere, was responsible for building the infrastructure, procuring equipment, and arranging the financing for the project. The track, stops and depot were designed and built by the Tramway Alliance, which included the City of Tampere, VR Track, YIT Rakennus, and Pöyry Finland, with Tampere Tramway and the City of Tampere as client parties in the alliance. Tampere Region Public Transport (Nysse) is responsible for organising public transport in the Tampere region, with VR contracted to operate the services and maintain the fleet.

The costs of work performed in conjunction with tramway and project content changes, such as construction of the Hämeenkatu entity and the Hatanpään valtatie branch track, were added to the Tramway Alliance commission. These additions increased the objective cost for the Tramway Alliance to approximately EUR 300 million, with about EUR 250 million allocated for construction and about EUR 50 million for other work performed in conjunction with construction. The actual costs were EUR 34 million euros under the objective cost.

“This is significantly less than expected, which benefits all the alliance parties. The city benefits both financially and in general, because it was possible to complete street and water services work – which would have been necessary in any case – at the same time. This alliance has proven its strengths, and we can now say that implementing the tramway in this manner was the right decision,” said Mikko Nurminen, Director of Tampere’s Urban Environment and Infrastructure service unit.

The city is currently implementing the expansion of the tram network. The second phase is under construction and covers an extension from the city centre to Lentävänniemi with a total length of 23 km. the phase 2 is also constructed by Tramway Alliance. The construction is implemented into two phases. The 2A phase between Pyynikintori and Santalahti is expected to be opened in 2023, while the 2B (Santalahti – Lentävänniemi line) will be opened in 2024.