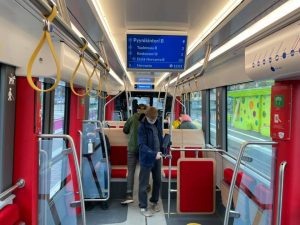 The first section of Tampere light rail entered trial traffic and it is planned to launch the commercial services at the beginning of August, the city municipality announced.

The first LRT section provides the transport connection from Pyynikintori (central part) to Hervanta (south-east) and from the Tays University Hospital (eastern part of the city) to Hatanpään valtatie.

“The construction of the tramway line is a huge project that has taken years to complete. These works have had many effects on the lives of very many Tampere residents. It is important that we now get to celebrate the completion of this effort together with the whole city”, Pekka Sirviö, the CEO of Tampereen Raitiotie (Tampere Tramway), the company responsible for the implementation of the project said.

In November 2021, the tests started on the LRT connection between Tampere University Hospital area in Etelä-Hervanta and Makkarajärvenkatu. The test runs started with comprehensive testing of functionality for the entire track and its technical systems. The Tramway Alliance will test the tracks, turnouts and overhead contact lines during the test runs. At the same time, the visibility of traffic signs, traffic lights and signals, intersections and crosswalks were assessed. Other work included the adjusting of the traffic lights as well as testing the permitted operating speed and turnout control. 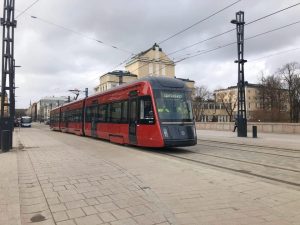 For the first section of Tampere light rail, the city ordered a total of 19 tramways. Škoda Transtech at its Otanmäki factory in Kajaani is manufacturing the three-section, bi-directional ForCity Smart Artic X34 which are 37.3 metres long. The average speed in revenue service will be 19-22 km/h. The maximum speed in service is 70 km/h. Tampere tram has a maximum capacity of 264 passengers of which 64 fixed and 40 folding seats. There is also space for 12 prams or 6 large wheelchairs, space for bicycles and 2 marked seats for guide dogs.

The Pyynikintori – Santalahti – Lentävänniemi LRT section has a length of 6.6 km served by nine stations. The 2A section will enter services in 2023 and the 2B section will be completed in 2024.