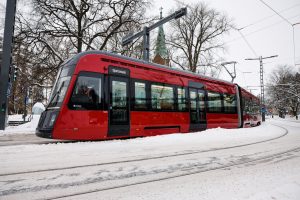 JCDecaux awarded Teleste a passenger information system contract under which will supply information displays and their management system as-a-service for Tampere Tramway, in Finland.

According to the contract, Teleste will deliver and install 90 double-sided TFT LCD displays at the tramway stops and shelters and take care of maintaining and upgrading the hardware throughout the seven-year agreement period.

The agreement also includes deployment and maintenance of company’s passenger information management software, which controls the delivery of information on displays. The system installations in the City of Tampere have begun in January 2021, giving a head start to Teleste’s passenger information system as-a-service offering.
For customers and public transport operators, passenger information system as-a-service will provide increased flexibility towards technology changes while lowering the threshold for new deployments. Among the key benefits achieved will be increased agility in obsolescence management, reinforced with easier control of the entire system infrastructure, including both hardware and software.

“Tampere Tramway is a unique construction project in Finland, where building up new public transport infrastructure in the city sets high requirements for system operation and integration. We are confident that Teleste is able to meet the challenging conditions and guarantee the high availability of passenger information to tramway users for years to come,” Matti Viitala, City Relations and Technical Director, JCDecaux Finland, said.

Tampere Tramway will begin operarations in August 2021. In November 2020, the test runs will soon enter next phase in which the first test passenger step on board to provide feedback on the tramway system and the planned traffic as a whole. Tampere Public Transport (Nysse) started to recruit test passengers and the first test is expected to take place in the coming months.

For the first time, the test runs on the tram section between Hämeenkatu and Pirkankatu towards Pyynikintori took place in November. During the first test runs, the functionality of the entire track and its technical systems were comprehensively tested. The Tramway Alliance is testing the drivability of the tracks, turnouts and overhead contact lines as well as the visibility of traffic signs, traffic lights and signals, intersections and crosswalks.