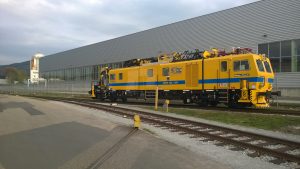 A CZK 438 million (EUR 17.24 million) contract was signed with CZ Loko which covers the installation of the mobile part of the European ETCS signalling system on a fleet of 44 vehicles. Under the contract, CZ Loko will install the new signalling system on MUV 75 vehicles designed for track repair and maintenance.

The first two vehicles equipped with onboard ETCS system will enter operation on the Olomouc – Uničov railway line in December 2022 and the entire contract for the remaining 42 vehicles is planned to be completed by the end of 2024.

MUV 75 vehicle, manufactured by CZ Loko, is equipped with hydrostatic power transmission from the diesel engine to two powered wheelsets.  The vehicles is designed to transport persons and material and is used for maintenance and repair activities on the rail lines and sidings with a track gauge of 1435 mm. 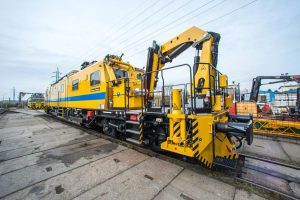 In 2017, SZ has received from Plasser & Theurer a MTW 100.013/7 special vehicle for control, maintenance and repairs of the catenary, marking the first foreign delivery of a vehicle specially designed and manufactured for work on rail lines. In 2015, the two companies signed a contract for three such machines with a value of CZK 173 million (EUR 6.8 million, in current prices). MTW 100.013/7 is a four-axle vehicle with hydrodynamic power transmission and 520 kW engine power.

The second ETCS onboard deployment contract with a value of CZK 553 million (EUR 21.77 million) was signed with AŽD Praha to equip a fleet of 54 special vehicles of which three MTW 100 vehicles and 51 MVTV vehicles in different versions.  They are all designed for maintenance, inspection, and repair of the overhead lines. The contract is expected to be gradually implemented by mid–2023.

The Czech ERTMS National Implementation Plan provides for the installation of ETCS on international corridors by 2025 and will gradually be extended to other major and regional lines by. Vehicles which are not equipped with a mobile part of the system will not be allowed on these lines. The onboard ETCS installation also applies to the special vehicles owned by the rail infrastructure manager, used for repairs and maintenance of railway lines or for diagnostic activities.