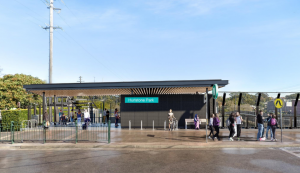 The joint venture will have to upgrade to metro rail standards the more than 125-year-old Bankstown Line between Sydenham and Bankstown.

The contract covers upgrade works for 15 bridges that cross over or under the railway, including installation of safety screens, the civil construction including work on retaining walls, culverts and track drainage, fencing along the rail corridor and the segregation of the existing freight line from the new driverless railway tracks. It also involves rail systems work including new track crossovers, upgrading and refurbishing overhead wiring and work to support signalling and communication equipment.

Separately, a AUD 98 million (USD 75.2 million) contract has been awarded to Downer EDI Works to upgrade Hurlstone Park, Belmore and Wiley Park stations to metro rail standards. This contract includes upgrading and re-levelling of existing platforms to provide level access to the new metro trains as well as upgrades to stations like painting, improved lighting, tiling and paving and upgrades security fencing adjacent to each station, including installation of anti-throw screens to existing overbridges adjacent to each station. Under the project, new lifts at Hurlstone Park and Wiley Park stations connecting existing concourses to platform level, new family accessible toilets at the two stations, and new service buildings and cabling for the new rail systems will also be provided. In addition, improvements will be carried out to interchanges including bike parking, taxi spaces, kiss and ride and accessible parking.

The stations will also be prepared for the installation of platform screen doors.

Southwest metro transport services on the upgraded Bankstown Line will start in 2024, when passengers will have a train every four minutes in each direction in the peak, with 15 trains an hour each way.

Currently, some stations like Wiley Park and Canterbury only have four trains an hour.

The next stage of major work to upgrade the T3 Line to metro standards will take place in June/July school holidays when there are fewer customers on the rail network.

In December, Sydney Metro awarded the contract to upgrade the stations on the Bankstown Line  to metro rail standards.