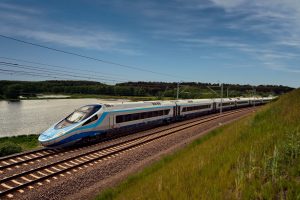 The consortium of Egis Polska, Egis Rail and Jaf-Geotechnika was selected by the Centralny Port Komunikacyjny, CPK (Solidarity Transport Hub) for a feasibility study on the construction of 140 km of new rai line along the No. 29 mainline on the Ostrołęka – Łomża – Giżycko route. The line is a key connection for the No. 3 mainline in the north-east of Poland.

The bid was announced as the most advantageous in terms of price (70%) and staff experience (30%) which were the two main factors that determined the selection.

PLN 20.1 million (EUR 4.4 million) was the value proposed by the consortium that will be responsible for the preparation of a technical, economic and environmental study. It will cover an analysis of the routes of the planned railway line and other specialised studies. CPK will indicate the preferred route of the line to the extent necessary for further preparations.

The consortium will have 14 months to prepare the three key stages and the entire contract may take up to 19 months to complete as the contract also includes geological documentation and maps for design purposes.

The construction of the line will provide citizens access to the long-distance rail connections, will link Warsaw and Giżycko (in north-east) reducing the travel time and it will also increase the capacity on the existing lines meeting the increases demand for regional and freight transport.

According to project’s timeline, the construction works for the first section between Ostrołęka and Łomża will start in 2023 and are expected to be completed by the end of 2027.

The construction of a new section of line No. 29 between the three cities brings great benefits to passengers. The travel time of trains connecting central Poland with Podlaskie and Masuria will be shortened, thus increasing the tourist potential of the region.

The investments of the Solidarity Transport Hub will make possible the removal of missing links of Poland’s rail network. Today, Łomża [150 km north-east of Warsaw] is one of the largest cities in the country with no access to rail passenger services. After the construction of the No. 3 mainline, this will change, and the travel time from Warsaw to Łomża will be 1 hour and 25 minutes,” Mikołaj Wild, the president of the CPK said.

CPK has also committed to subsidize the preparatory works carried out by local governments for the modernisation of the railway line No. 223 from Orzysz through Mikołajki, Mrągowo and Biskupiec to Czerwonka. The project has been qualified for the second stage of Kolej Plus programme which is implemented by PKP PLK. 56 km of new lines will be built in Podlaskie Voivodeship and another 265 km will be modernised, while for the Warmian-Masurian Voivodeship, in northeast Poland, 74 km of new lines will be constructed and 208 km will be modernised.

On rail segment, the Solidarity Transport Hub, which will integrate the air, rail and road transport in Warsaw and Łódź, areas programme covers the construction of 1,800 km of new lines and the modernisation of 2,400 km of existing rail connections. The new lines are expected to be completed by 2034. The investments include 12 rail routes, of which 10 mainlines connecting various Polish regions to Warsaw.