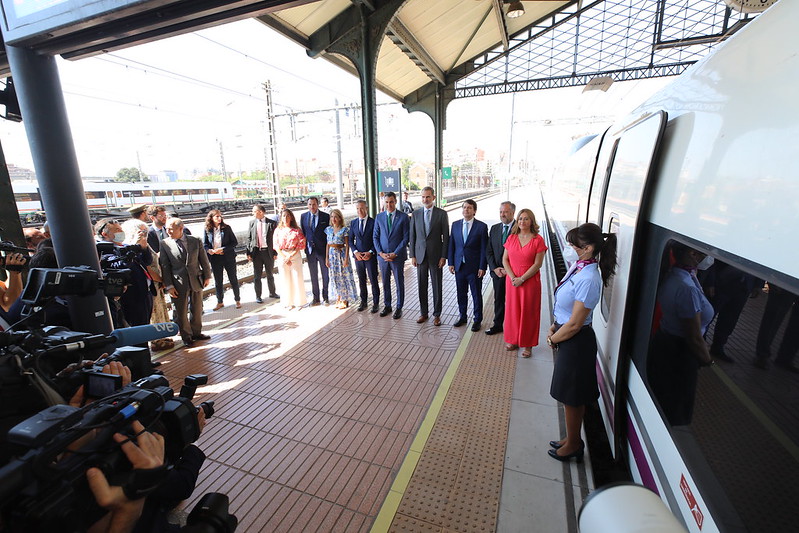 Adif Alta Velocidad has put into operation the Venta de Baños (Palencia) – Burgos HSL creating the  Madrid – Burgos high-speed connection on the North line (LAV). This section extends the Spanish high-speed network by 86.5 km. Under the project 90 km of new line has been constructed 4.5 km of which represents the branch between Palencia and Burgos.

The line is designed to reach a maximum travel speed of 350 km/h and is equipped with the ERTMS/ETCS Level 2 technology installed by a consortium of Alstom (96%) and Indra (4%) which is also providing maintenance services for a 20-year period on the Valladolid – eón and Venta de Baños – Burgos high-speed line, under a contract awarded in 2015. The consortium was responsible for the project design, procurement, installation and commissioning of the signalling system, fixed telecommunication and automatic train protection (ATP) systems, centralised traffic control (CTC), security equipment, GSM-R communications equipment and infrastructure for trains and operators.

The high-speed line to Burgos starts from the triangle or railway junction of the town of Venta de Baños on the North-Northwest high-speed corridor, connecting the Valladolid – Palencia – León – Asturias and Venta de Baños – Burgos – Vitoria – French border axes. This will allow direct services between these lines and the cities of Valladolid, Palencia and Burgos, reducing travel times and increasing the reliability and capacity of the infrastructure.

At Burgos Rosa Manzano station, a gauge changer has been installed to create synergies between the high-speed and conventional networks, since trains with origin or destination in the Basque Country will be able to travel on the Madrid – Burgos high-speed line under the same principles of quality and reliability, to then continue the journey through the conventional line.

The line will reduce the travel time between Madrid and Burgos to 45 minutes from 1 hour and 30 minutes and it will have twice as many services, going from 15 weekly frequencies to 32.  The new line will also bring benefits for train journeys to the Basque Country, which will reduce journey times by up to 38 minutes on the new Alvia services. They will connect Madrid with Bilbao in 4 hours and 28 minutes instead of more than 5 hours or Madrid with San Sebastián in 4 hours and 48 minutes, instead of 5 hours and 23 minutes.

The new connection to Burgos the Spanish high-speed rail network reaches 4,000 km, the most extensive such network in Europe and the first in the world with ERTMS technology per km of line. Currently the digital technology is installed on 2,700 km of rail in Spain.

The high-speed connection to Burgos needed an investment of EUR 759 million. It is part of the Venta de Baños – Burgos – Vitoria / French Border high-speed line project co-financed by the European Union through the 2014-2020 European Regional Development Fund (ERDF) under the, through Pluri-Regional Operational Programme. The project was also supported by the Connecting Europe Facility for the ERTMS installation on the Valladolid – Burgos section. EUR 15.56 million was the eligible cost of this component, with a 50% CEF contribution representing EUR 7.78 million with action covering trackside deployment of ERTMS Level 2 (ETCS and GSM-R), Baseline 2.3.0d on an 85 km long double-track equivalent railway line section from Valladolid to Burgos located on the Atlantic Core Network Corridor.