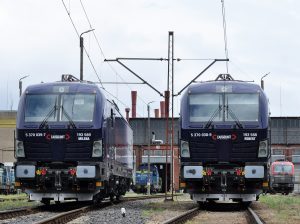 Siemens Mobility and Cargounit have signed a framework contract for the supply of up to 30 advanced Vectron MS locomotives, including the provision of maintenance services. Under the contract, 10 vehicles will be delivered by the end of 2023, with the option to order a further 20 locomotives by 2024. The first two locomotives will be delivered later this year.

In 2018-2019, Cargounit ordered a total of 6 Vectrons MS, the last two of which were delivered in June 2021. By 2023, the fleet will increase by another 10 vehicles, and with the exercised option, by 2024 the leasing company will have a total fleet of 36 Vectron MS locomotives.

The new Vectron multisystem locomotives have a capacity of 6.4 MW in alternating voltage and 6.0 MW in direct voltage supply and were equipped with the ETCS system compliant with the current specifications (Baseline 3). The locomotives are intended for operation in Poland, Germany, Austria, the Czech Republic, Slovakia, Hungary, Slovenia, Croatia and Serbia, the Netherlands, optionally in Romania and Bulgaria. The locomotives from the Vectron platform already have approvals for operation in as many as 20 European countries.

“The Cargounit strategy assumes dynamic development through investments in modern electric locomotives. The purchase of Vectron MS locomotives, constituting the core of the multi-system locomotive fleet of leading national carriers and private carriers, fits perfectly into the development plans of our company. An important aspect when choosing a supplier of multi-system locomotives was the ability to quickly deliver fully homologated locomotives to meet the current needs of our customers,” Łukasz Boroń, the President of the Management Board of Cargounit said.

Cargounit is expecting a “double-digit increase in the dynamics of intermodal transport in the region of the Three Seas countries” and its decision to acquire more locomotives in two variants of equipment (A10 and A17) approved in the different European countries, it will be able to meet market demand in the Central and Eastern Europe region.