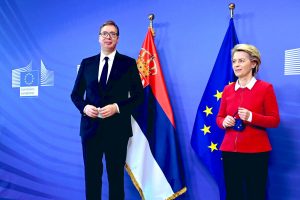 According to the Serbian President, the European Union would provide a financial support covering between 35 and 50 per cent of the project costs, resulting in a EUR 600 million funding.

The project is expected to be also supported by the European Investment Bank (EIB) and the European Bank for Reconstruction and Development (EBRD).

Serbia-North Macedonia railway project consists of the reconstruction of the 243.5 km–long line between Belgrade and Niš and will provide rail connection to Preševo, in southern Serbia towards Skopje, in North Macedonia. The Niš – Preševo rail link is one of the oldest railway lines in Serbia and the most important part of Corridor X through Serbia. It has a total length of 151 km and is electrified using the single-phase 25 kV, 50 Hz system over the whole of its length. Under the project, 92 km of rail track will be also fully renovated on the Brestovac – Vinarci, Orevo – Vranjska Banja, Ristovac – Bujanovac i Bukarevac – Presevo – border North Macedonia rail sections. This will increase the commercial speed from 43 km/h to 76 km/h. 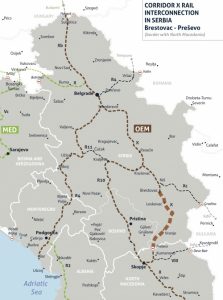 In June 2020, the EU-funded Technical Assistance for the Rail Interconnection from Niš to Preševo at the border with North Macedonia project has started under the Western Balkans Investment Framework (WBIF) initiative. This sub-project concerns the rehabilitation of 132.6 km long single railway line between Brestovac (15 km south of Niš) and Preševo at the state border of Serbia with North Macedonia. EU allocated a EUR 3.5 million technical assistance grant through WBIF for the preparation of the documents prior to implementation. EUR 182.2 million is the total investment for the Niš – Preševo railway line rehabilitation and is financed through a EUR 90.5 million EIB loan, EUR 14.67 million in national contribution, EUR 4 million in EU grants for technical assistance and potential additional WBIF grants of more than EUR 70 million.

The Belgrade – Niš railway project is estimated at EUR 2 billion and will allow trains to run at speeds of 200 km/h and with 160 km/h on the Niš – Preševo rail line. The construction works are expected to start this year and are scheduled to be completed in 2023.

The line linking the two countries is part of the European transport Corridor X.