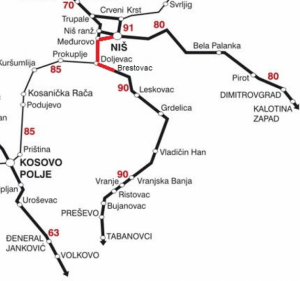 The project envisages the modernisation of the 23-km rail section, as well as the installation of telecommunication and signalling systems at Niš and Brestovac stations.

The Niš – Brestovac is the first section of the Nis-Preševo line, representing 15% of the total length.

Through this project, the capacity, safety and reliability of the railway line will be enhanced, as well as the quality of transport service on the railway line Nis – Preševo. At the same time, travel times of passenger and freight trains along this part of the line will be reduced, thus contributing to the increase in transport volumes of overall passenger and goods service between South and Central (West) Europe.

The project is co-financed by the European Union under the 2014-2020 Instrument for Pre-Accession Assistance (IPAII).