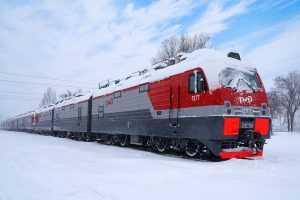 Since January 2021, each new Class 3ES5K is equipped with the autopilot system. Throughout 12 months, the Russian company manufactured 136 such mainline freight locomotives and almost 500 more were equipped with these systems through respective service depots.

The virtual coupling enables synchronised operation of two trains while maintaining a safe distance of 2-3 kilometers between them (typically it is 4 – 5 km) and controlling both trains from one locomotive. The vehicles use a digital radio channel for exchange of service information and the system can operate without traffic signals. It allows to decrease the interval between the trains on a rail line by up to 2 times, from 10 to 5 minutes, and thus allow more traffic through a given time.

The Ermak electric locomotives feature a microprocessor control and diagnostics system. Compared to previous generations, these vehicles boast significantly better technical and economic characteristics. Their modular drivers’ cabs comply with all modern sanitary, ergonomic, and safety norms while providing a comfortable working environment for the crews. Since late 2018, these locomotives feature a bi – axis traction control, which makes them capable of hauling 7100 – tonne freight trains on the Russian Railways’ Eastern network.

The Class 3ES5K electric locomotives were designed for harsh climatic and landscape conditions of East – Siberian, Far – Eastern, and Baikal Railways. In addition to Russian Railways, such locomotives are operated by Uzbekistan Railways and Russian railway private operator NefteTransService.