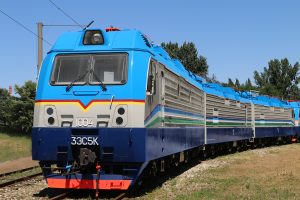 TMH and Uzbekistan Railways signed the contract in May 2020 for the supply of latest version of this locomotive type equipped with a bi-axis traction control and an independent excitation of the traction motors. This allows for improved performance on volatile landscape, characteristic of railways of Uzbekistan, an increased capacity for heavier trains, and a better overall efficiency.

In April 2020, the Uzbekistan National Bank for Foreign Economic Affairs and Russian State Development Corporation Vnesheconombank have signed an agreement for a EUR 14.3 million credit line for locomotive procurement.

In 2019, the representatives of Transmashholding presented Uzbekistan Railways the possibility of operation of 3ES5K electric locomotives which must meet country’s conditions which require technical characteristics and temperature regimes. During the meeting, important attention was paid to electrification and the switching to electric traction possibility which is increasing the reliability of the locomotive fleet.

The locomotive booster unit has a set of equipment, which provides electric locomotive’s operation in traction and regenerative braking modes, controlled by a single locomotive crew from a driver’s cabin in the leading or trailing unit.

The 3ES5K electric locomotive is designed to haul freight trains on the 1520 gauge railway systems able to run at speeds of 110 km/h.