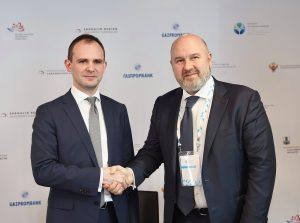 TMH-Energy Solutions, a subsidiary of Transmashholding and Rusatom Oversiz, a subsidiary of Russia’s State Atomiс Energy Corporation, Rosatom, signed a Memorandum of Cooperation to create a joint venture to develop and use hydrogen fuel cells for rail transport.

Under the agreement, the parties intend to implement a project involving the creation and supply of a refueling infrastructure and power plants for hydrogen fuel cell trains for operation on the territory of the Sakhalin Region. In addition, it is planned to develop a concept and take part in the implementation of a project involving the use of hydrogen fuel cells on Moscow transport system as an integrated supplier of transport power plants, a developer and owner of a filling infrastructure.

The two companies aim to ensure the localisation of advanced foreign hydrogen energy technologies to be used by the Russian transport sector as well as to organise the development, create conditions for the professional ownership and management of the hydrogen transport infrastructure, as well as the sale of hydrogen for use in the transport sector.

“This is a significant pilot project for the region, which is being developed by Russian Railways, State Atomic Energy Corporation Rosatom, Transmashholding and the Government of the Sakhalin Region, and we will make every effort to successfully implement it. We also see significant prospects for the development of hydrogen transport in other regions of Russia,” Yevgeny Pakermanov, the president of Rusatom Oversiz said.

“Hydrogen fuel cells technology is one of the foundations of the energy of the future. Its wide use will significantly reduce the impact of transport on the environment which is especially important in urban agglomerations and large industrial centers,” Kirill Lipa, the Director General of Transmashholding said.

In 2019, during the Eastern Economic Forum in Vladivostok, Russian Railways, the Government of the Sakhalin Region, Rosatom and TMH signed an agreement to cooperate and implement a pilot project to organise the rail traffic using trains powered by hydrogen fuel cells. The project envisages the creation of a competence center for the development and subsequent distribution of organisational and technological solutions in the Sakhalin region. The train will be tested on non-electrified railway lines,  primarily in the Far East.