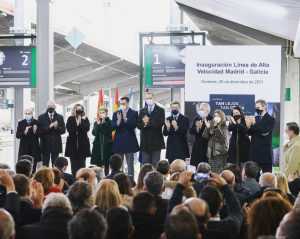 Spain’s King Felipe VI, the President of the Government of Spain, Pedro Sánchez, and the Ministry of Transport and Mobility Raquel Sánchez opened the Madrid-Galicia high-speed rail following 16 years of construction.

Thanks to the commissioning of the section between Pedralba de la Pradería (Zamora) and Ourense, the inaugural trip between Madrid and Ourense stations took place on December 20, 2021. On November 22, the Transport Minister attended the train test trip between the two cities.

The trip was also attended by the Second Vice-President of the Government of Spain and Minister for Work and Social Economy, Yolanda Díaz, and the President of Galicia, Alberto Núñez Feijóo, among other authorities.

“The Government of Spain has always been clear that the arrival of the AVE to Galicia was an absolute priority”, Pedro Sánchez said on the arrival at Ourense station, after completing the first full AVE journey between Madrid and Galicia.

The arrival of the high-speed train to Galicia culminates a process began in 2007 with the commissioning of the Guadarrama railway tunnel, which together with the opening of the section between Zamora and Pedralba de la Pradería in 2020 and the definitive arrival of the AVE to Ourense, will reduce the train connection between Madrid and Galicia to two hours and fifteen minutes.

The first high-speed line between Galicia and the central plateau enters service after the inauguration of the last section between Pedralba de la Pradería and Ourense. The 120 km route includes 31 tunnels and 32 viaducts.

The connectivity of Galicia with the centre of the peninsula will continue as the government is committed to implement the actions that will complete this high-speed line, extending it to Santiago de Compostela, where it will link up with the Galician Atlantic Axis running from Ferrol to Vigo and to the border with Portugal.

The rail project, together with the Atlantic Axis, has a state investment of EUR 10.95 billion, of which EUR 10 billion have already been executed, 92% of the total planned.

“The arrival of the high-speed train in Galicia is the crowning glory of a national project that brings together citizens and territories and represents a key step in the transition of our country towards a sustainable and environmentally friendly development model,” Raquel Sánchez said.

From the capital of Orense, trains will improve their journey times to the rest of Galicia. The Madrid-Galicia high-speed rail is 418 km long, from the Olmedo junction to Santiago de Compostela, where it connects with the Atlantic Axis linking A Coruña, Santiago, Pontevedra and Vigo.