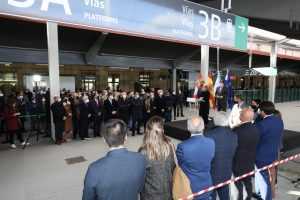 The Spanish Minister of Transport, Mobility and Urban Agenda Raquel Sánchez Jiménez has announced that the final Pedralba de la Pradería – Ourense rail section on the Madrid-Galicia high speed line has been completed and the passenger services will start on December 21.
On November 22, a test trip was organised on the railway line between Madrid and Ourense.
The Minister, the President of Galicia, Alberto Núñez Feijoo, the President of Castilla y León, Alfonso Fernández Mañueco, the president of Adif, Maria Luisa Domínguez, the president of Renfe, Isaías Taboas, and other officials attended the event.

The 119.4 km long Pedralba de la Pradería – Ourense rail will reduce the travel time between Galicia, the Plateau and Madrid between 50 and 90 minutes depending on the case, contributing to the social and economic development of the territories it crosses.

EUR 2.96 billion was invested for the construction of the new rail section which is the continuation of the Zamora – Pedralba de la Pradería line inaugurated last year.

The final section will allow Avril trains to run at a commercial speed of 300 km/h along the Madrid-Galicia high speed line for which a EUR 9 billion investment was provided by the state in the last 16 years.

Taboadela – Ourense (16 km, of which a 2 km connecting branch)

On November 16, Adif has launched a tender for infrastructure pre-maintenance and maintenance services for the Pedralba de la Pradería – Ourense section. EUR 68 million (VAT included) is the value of the 48-month contract which will start in 2022 and will be performed until 2025.

The scope of the activities of the contract includes the maintenance and conservation of the core components of the infrastructure including railway platform, track and track devices on the Pedralba de la Pradería – Ourense and Ourense – Santiago de Compostela sections on the Madrid-Galicia railway line and on the Vigo Urzáiz – A Coruña section on the Atlantic Axis.
These rail sections fall within the scope of the O Irixo maintenance base and the A Mezquita subbase, both situated in the province of Ourense, whose maintenance is also included in the contract.

The contract also covers improvement actions covering small maintenance works for the platforms, road access, fences, track, switches and buildings to improve the reliability of the facilities and increase the useful life of the assets.

The Atlantic Axis runs from north to south along the Galician Atlantic coast between Ferrol and the Portuguese border for 241 km, connecting five of the seven largest Galician cities.The system is connected to the new Madrid-Galicia high speed lineat Santiago de Compostela.

The entire route of the Atlantic Axis between Vigo Urzáiz and A Coruña, with a total length of 155.6 km, is already in commercial service, which reverts to significant savings in travel times in all relations, while increasing comfort by establishing optimal rolling and tracing conditions. The distance between Vigo and A Coruña has been shortened by 21.8 km.

In January 2020, the European Commission has approved in EUR 226 million funding from the ERDF for the construction of 48.5 km-long Lubián – Taboadela rail section part ofnthe high-speed railway from Madrid to Santiago de Compostela in Galicia. It is expected that the new section will enter services in January 2022. In October 2020, Spain has put into commercial operation the 110 km section linking Zamora and Pedralba de la Pradería on the Madrid-Galicia high speed line.