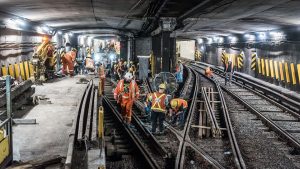 Infrastructure Ontario and Metrolinx issued two Request for Proposals (RFPs) to the six shortlisted companies to bid on the advance tunnelling work for two new Toronto transit projects – the  Scarborough metro extension and the Eglinton Crosstown West extension. The contracts are expected to be awarded in mid-2021. The Requests for Qualifications were launched in March 2020.

The teams have been invited to respond to an RFP and will begin preparing their proposals that detail how they will deliver the project.

Three consortia have been selected for the Scarborough metro extension:

The Scarborough metro extension is a 7.8-km extension of TTC’s Line 2 from Kennedy station to McCowan Road/Sheppard Avenue. The tunnelling is one of the first phases of work for the project. the future section will have transit connections to Line 2, Line 5 – Eglinton Crosstown LRT, GO train service (Stouffville line) and Durham Region Transit bus service. The metro extension project is estimated at CAD 5.5 billion (USD 4.17 billion) and is expected to be opened before 2030.

For the Eglinton Crosstown West extension, three consortia have been shortlisted:

The Eglinton Crosstown West extension involves the construction of a 9.2 km LRT section known as future TTC Line 5 and six new stations. The extension will run mostly underground, westward from the future Mount Dennis station to Renforth Drive. The project was estimated at CAD 4.7 billion (USD 3.56 billion) scheduled to be completed by 2031.

The two new Toronto transit projects are part of a transport vision unveiled in April 2019 to develop Ontario’s transit network. The needed investment of the four selected projects was estimated at CAD 28.5 billion (USD 21.6 billion).