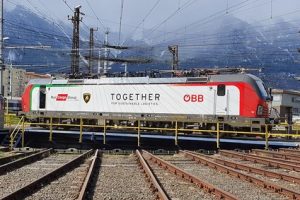 ÖBB Rail Cargo Group agreed with Lamborghini to deliver transport services from Germany to Italy to reduce the emissions and the carbon footprint.

The two companies have created a new rail transport concept with a transit time of just 48 hours, a record time for this type of transport, which is currently the fastest, most efficient, and eco-friendly transport service between the two countries.

Under the agreement RCG is transporting Lamborghini URUS car bodies from the VW factory in Zwickau, Germany, to the Lamborghini headquarters in Sant’Agata Bolognese, Modena, Italy.  It is expected that 80 trains per year will transport the car bodies for Lamborghini.

Through this new service, the Austrian operator will transport the Lamborghini URUS car bodies only by rail, which will replace entirely the road transport. The weekly transport will reduce CO2 emissions by 85 per cent going from 2,234 tonnes to just 331, saving some 1,903 tonnes of carbon dioxide per year. 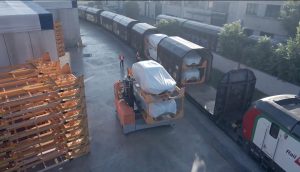 From the sustainable perspective, the only transport by wheel will take place on gas trucks (LNG) and will be that from Modena to the Sant’Agata Bolognese site, accounting for around 21 km out of the total 1,000 km journey.

The ÖBB Rail Cargo Group’s goal is to shift more freight to rail. Every tonne RCG transports by rail reduces the size of our carbon footprint and is a step towards achieving our Austrian and European climate targets. Currently, 1.1 million tonnes of CO2 a year are avoided thanks to the ÖBB rail freight transport services in Austria. With this new rail transport concept, the ÖBB RCG’s sustainable rail transport services helping counteract the vicious cycle of transit traffic on the Brenner Pass. This relieves Austria, especially the Province of Tyrol and its population, of the burdens of air and noise pollution. In the European Year of Rail, this new cooperation is another significant milestone on the way to achieving our European climate targets.