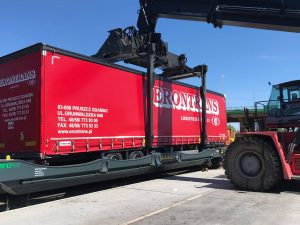 PKP Cargo Connect launched a permanent intermodal connection on the Poznań – Duisburg route allowing goods to be transported to other countries including the UK.

The service is provided by the Polish company, part of PKP Cargo, and Duisport Agency, belonging to Duisburger Hafen Group under the intermodal connection network expansion to transport semi-trailers and containers between the world’s largest inland port in Duisburg and the existing terminals in Poland.

Duisburg handles over 100 intermodal connections in Europe, which allows the transport of goods also to other parts of Europe after transshipment at this port. One of them is Great Britain, which is a target area for many clients of PKP Cargo Connect.

The permanent connection is currently provided 4 times a week from the PKP Cargo Connect terminal in Poznań – Franowo with the possibility of increasing the frequency to 6 pairs of trains per week in the next 3 months. The trainset on this route is equipped with container platforms, pocket wagons for the transport of intermodal trailers and the Cargo Beamer system for the transport of standard semi-trailers that are not adapted for rail transport.

“We are introducing modern solutions, the popularity of which will increase year by year, as is the case in Western Europe. The transport of semi-trailers is a practical implementation of the <Trucks to the track> slogan and being part of the PKP Cargo Group obliges to introduce innovative solutions. Transporting semi-trailers by rail is a solution to the problem with the availability of drivers and reduces the level of CO2 emissions to the atmosphere,” said Przemysław Hoehne the deputy director of the Department of Multimodal Transport at PKP Cargo Connect.

The Poznań-Franowo terminal is the most modern and one of the largest terminals of the PKP Cargo Group. It is situated on the East-West communication route on the North Sea – Baltic Cone Network Corridor and it also benefits a very close road connection to the A2 motorway, the S5 and S8 expressways.

“Railways have some competitive advantages compared to other modes of transport and we are trying to make the best use of our advantages so that as many loads as possible are transported by trains in the logistics chain,” Czesław Warsewicz, President of PKP Cargo said.