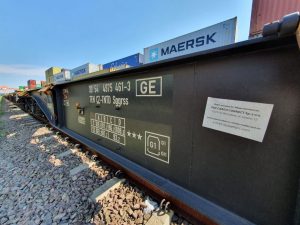 PKP Cargo Connect will extend its transport connections to Turkey and Great Britain, under two agreements signed with two companies.

With Logitrans, a Turkish company, PKP Cargo Connect is launching a new connection on the Poland-Turkey route. Thin month, the first train will run on the Gliwice – Izmit – Gliwice rail route. The details and final terms of cooperation were agreed at a meeting in Istanbul with the participation of representatives of PKP Cargo Connect and Logitrans. The Turkish company is a leading logistics brand in the Asia area, including Russia, Kazakhstan and other countries of the Commonwealth of Independent States, the Baltic States and Central Europe. “It is a great commercial success, and we hope business success as well,” Ivan Ružbacký, the president of PKP Cargo Connect said.

The scope of cooperation between the parties is to include a train service on the Gliwice – Izmit – Gliwice route, as part of the operator’s connection network.Izmit is one of the most important cities on the economic map of Turkey, a large port located about 100 km from Istanbul, on the eastern coast of the Sea of Marmara.The regular service on this route will be operated once a week in both directions, and the first train will depart at the beginning of May 2021.

The Polish operator sees a considerable development potential of the connections between Poland and Turkey. “We are prepared to increase the number of trains to two a week before the end of the year. It will depend on the interest among customers in our new intermodal connection,” Michał Gileta, the manager of the Intermodal department of PKP Cargo Connect. In addition to the rail transport and reloading, it is possible to provide truck transport both from forwarders to the terminal and vice versa.

“Strengthening the presence on the North-South transport corridor is one of the priorities of the PKP Cargo Group’s strategy,” Czesław Warsewicz, the president of PKP Cargo said.

With Duisport Agency GmbH, a company belonging to Duisburger Hafen, PKP Cargo Connect will launch an intermodal service to Great Britain via Duisburg. The initiative consists of the opening of an intermodal connection on the Gliwice – Duisburg – Great Britain route. Samskip, a Dutch company, is another partner of the project which offers a wide range of intermodal services connecting the Central and Eastern Europe with Great Britain, Ireland, Norway, Italy, and Sweden. The Duisport Group forms the axis that connects producers and customers, connects international markets and acts as a motor for regional and global flows of goods.

The intermodal service will run twice a week and in the coming months it is planned to increase the frequency to three or more trains per week. Each train will carry 40 containers. The terminal in Gliwice is one of the most important facilities of this type of PKP Cargo Connect, from where there are also direct connections with Małaszewicze in eastern Poland, known as the “gate to the EU” on the New Silk Road, which are also of key importance in the export of European goods to Asia. In addition, the terminal in Gliwice has a permanent connection to Piacenza, in Italy’s Emilia Romagna region, and it will gain new international routes to Dresden and Izmit.

The train will cover the distance between the Gliwice terminal and the Duisburg Port within 20 hours, which will be more competitive with road transport. “Through the dense network of intermodal connections at the port of Duisburg, our rail connection also becomes a gateway to other European markets. We want our solution to be very competitive in relation to road transport,” Ivan Ružbacký said.

“The environmental effects of the new intermodal service should also be added. It is worth adding that the use of intermodal transport on this route is of great importance for the protection of the natural environment, as it will reduce the load on roads by over 1,800 trucks a year, which means a reduction of CO2 emissions in the amount of about 6,000 tonns,” Ružbacký explains.