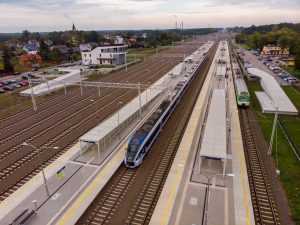 PKP Polish Railway Lines is expecting to spend over PLN 14 billion (EUR 3 billion) in 2022 as part of the National Railway Programme. In addition, the company will soon announce tenders for the modernisation and construction of rail infrastructure under the 2021-2027 financial perspective. The documentation for the planned investments is already completed and in 2022 the company will initiate tender procedures estimated at PLN 11-12 billion (EUR 2.37- 2.6 billion).

The work on the preparation of projects for the new perspective 2021-2027 has been going on for several years and includes the development of study and design documentation. Their implementation was started by PLK even before the first reports on the size of the EU and national budgets in the new programming period appeared.

The basic assumption is to adapt the infrastructure to the requirements of the TEN-T Core Network. The implemented projects will allow longer freight trains (740m) while maintaining the pressure of 221 kN /axle with a speed of 100 km/h, more rail connections will be electrified and ERTMS/ETCS will be deployed on the rail lines part of the TEN-T Core Network.
As part of the new EU perspective, projects are also planned to improve capacity in urban agglomerations by extending the tracks to the agglomeration to 4 tracks, which will allow the separation of suburban, long-distance and freight traffic.

There are also plans for investments aimed at connecting the main urban and agglomeration centers with modernised railway lines, on which it will be possible to further increase the permissible maximum speed, which will allow to shorten the travel time between individual cities. Investments for the construction of the CPK (STH) will also be implemented.

These projects will be complemented by the implementation of the Kolej Plus Programme, the Government programme for the construction or modernisation of railway stops between 2021 and 2025.
PLK will continue cooperation with local governments as part of the safety improvement program by building collision-free intersections.

The National Railway Programme worth EUR 16.6 billion (PLN 77 billion) is 93% completed providing now more accessible stations and stops across the country, shorter travel times and better conditions for the freight transport. EUR 15.37 billion (PLN 71.2 billion) is the total value of the completed and under construction projects.

The use of EU and budget funds has reached the highest value in the history of PKP Polish Railway Lines. At a similar stage in the previous perspective, expenses of PLN 13.7 billion (EUR 2.95 billion) were made, and currently PLN 45 billion (EUR 9.7 billion) investments are used for passenger and freight transport on 5,500 km of tracks.

“Thanks to EU funding the travel conditions are improved. Inhabitants of every voivodship, large and small towns gained better access to railways and an offer of better travel. We travel faster and shorter from Warsaw to the Tri-City, from Kraków to Katowice, from Poznań to Wrocław or from Warsaw to Olsztyn. Trains returned, including from Dębica to Mielec and through the Copper Basin,” Ireneusz Merchel, the CEO of PKP Polskie Linie Kolejowe said.

Under the prgramme, 370 stops were modernised and rebuilt. Lifts, ramps, and special signage have increased the comfort and quality of access to railways for travelers who use stations in large cities, such as Szczecin, Lublin, Rzeszów, Gdańsk Główny, and in smaller towns.

PLK has constructed more than 50 new stops in additional locations and residents of more than 100 municipalities travel more comfortably and commute to work and school more efficiently and safely. In addition, rail services returned to unused routes and increase transport accessibility thanks to investments on the Legnica – Rudna Gwizdanów, Lublin – Łuków or Mielec – Dębica railways.
The company managed to use over 500 new collision-free intersections and reconstructed viaducts every day, and modernised and equipped 2,000 railroad crossings.

The projects dedicated to rail freight transport are already completed and include rebuilt, modernised and electrified lines. The projects required the reconstruction of control devices, bridges and viaducts as well as engineering facilities. EU funds have been used for the construction and modernisation of nearly 600 bridges, such as the bridge over Bug, part of the Rail Baltica, or the bridge over the Vistula River in Kraków on the E 30 route, or on the San River on the Lublin – Stalowa Wola route.

According to Joanna Lech, the director of the Center for EU Transport Projects, PKP PLK is one of the two main beneficiaries of EU funding in the transport sector. Under three 2014-2020 programmes – Infrastructure and Environment OP (OPI & E), Eastern Poland OP and CEF, 77 contracts were signed for the total amount of EU funds allocated to projects with a value of PLN 35.64 billion (EUR 7.7 billion). By the end of 2022, it is planned to conclude all contracts for co-financing with the use of EU funds from the 2014-2020 perspective under the OPI & E. All contracts have already been signed under OP EP and CEF.