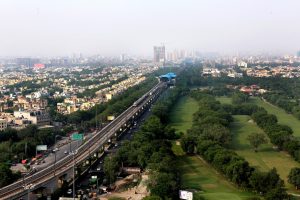 The ODA (Official Development Assistance) loan was signed by C.S. Mohapatra, Additional Secretary, Department of Economic Affairs, at the Ministry of Finance and by Katsuo Matsumoto, the Chief Representative of JICA India Office.

The loan will be used to construct the metro lines which will link Delhi and the new communities in the National Capital Region. Delhi Metro Phase-4 extension comprises the construction of eight metro lines totalling 115.94 km, of which three corridors were selected as priority projects. Magenta Line, Pink Line and Silver Line are the three selected corridors to be firstly constructed, totalling 65.1 km and 49 stations.

Magenta Line will have a length of 28.92 km and 25 stations linking Janakpuri West with R K Ashram. 7.74 km will be underground and 21.18 km elevated. This corridor is an extension of Kalindi Kunj – Janakpuri West Corridor of Phase-III of Delhi Metro. On 30 December 2019, the construction for Delhi Metro Phase-4 was inaugurated, with works starting on this line at the existing Haiderpur Badli Mor station, on the Line 2.

The Pink Line, with a length of 12.56 km and 8 stations will connect Mukundpur and Maujpur on an elevated corridor. The line from Majlis Park to Shiv Vihar, both in North Delhi, is an extension of the Phase-III of city’s metro system.

The Silver Line will be 23.62 km–long of which 19.34 km will be underground and 4.28 km elevated line. It will have 16 stations connecting Aerocity and Tughlakabad. This corridor originates from Aero City, adjacent to an existing station on the Airport Express line. The first civil contract for the Silver Line was signed in 2020.