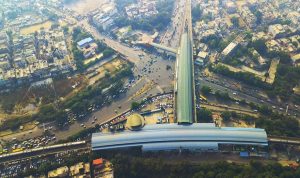 Delhi Metro Rail Corp awarded the first civil contract for the Tughlakabad – Aerocity metro line, one the three metro corridors which will be constructed under the Phase 4.

The contract involves the construction of a double-track metro viaduct from Sangam Vihar to Saket – G including four elevated metro stations at Sangam Vihar, Khanpur-Devoli, Ambedkar Nagar and Saket-G. The work is expected to be completed in about three years.

The Tughlakabad – Aerocity Metro corridor is 20.20 km-long with 15 metro stations. It will connect the Kashmere Gate – Raja Nahar Singh Violet Line with the Airport Express Link.

Three corridors of Phase 4 were approved which envisages the construction of 61.68 km new metro lines and 45 elevated and underground stations.

This is the third civil contract awarded for the implementation of Phase 4. The other two awarded contracts include: the construction of 10 stations on the Janakpuri West – RK Ashram Metro corridor; the Maujpur – Majlis Park corridor comprising of a bridge across river Yamuna and an integrated elevated viaduct and 8 elevated stations.