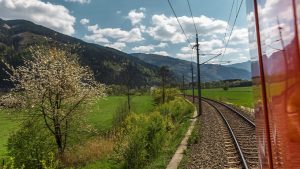 ÖBB has unveiled its rail investment plan of over EUR 25 billion which will be implemented from 2021 until 2026. EUR 20.6 billion will go towards the expansion of the railway infrastructure and renewable energy. EUR 3.4 billion are being invested in the modernisation and expansion of the train fleet in the passenger transport sector. In addition, investments are also being made in new night trains to expand the ÖBB Nightjet network.

“In the night train segment, we want to once again significantly expand our pioneering role in Europe. We will resume the established programme at the beginning of the summer – for example to Rome, Venice, Milan, Livorno. We are introducing Amsterdam as a new destination, and Paris will finally be added at the end of the year,” ÖBB Chairman of the Executive Board Andreas Matthä said.

Over the next six years, the Austrian rail company will invest EUR 1.5 billion to digitalise the railway system as part of its climate protection programme.

“We will continue to live up to our responsibility as Austria’s No. 1 climate protection company and move to the forefront of the industry in terms of innovation and digitalisation,” Matthä said.

Projects such as the graphic seat reservation or the wegfinder app, coupled with ÖBB360° offers for the first and last mile, are intended to make passenger transport even more customer friendly. In the infrastructure sector, work is underway on a “digital twin” of the ÖBB rail network in order to manage maintenance and network utilisation more efficiently and cost-effectively.

Digitalisation is also being driven forward in the freight transport sector. “End-to-end digitalisation will make freight transport by rail faster and more efficient. Rail logistics will thus become as easily accessible as road logistics. This is a direct step into the future,” Andreas Matthä explains. ÖBB will continue to be a reliable employer intending to provide 2,700 new jobs per year until 2025. 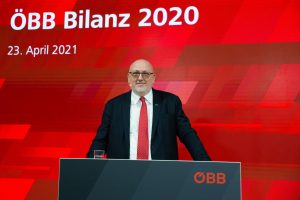 With its rail investment plan, the company hopes to fight against pandemic effects. Despite difficult circumstances and major challenges posed by the Covid crisis, the company succeeded in absorbing the sharp EUR 700 million drop in revenue in 2020. By quickly implementing countermeasures and making massive savings of around EUR 380 million, ÖBB was able to shoulder more than half of the loss of revenue itself. This was supplemented by a EUR 200 million railway package from the federal government, in the form of emergency contracts on the western line, additional orders and a reduction in rail tolls, to help the entire sector. In the end, the balance sheet of the previous year shows a black zero for all ÖBB sub-groups. Active crisis management enabled the Group to break even with a slight plus, with EBT just under EUR 59 million.

“The marginally positive EBT is important especially with regard to ensuring the investment capacity of the entire ÖBB Group. This enables us to secure not only the trust of the financial markets, but also the most attractive financing conditions possible,” ÖBB Chief Financial Officer Arnold Schiefer said.

In 2020, 286.5 million passengers used ÖBB’s mobility services. In total, this was 190 million less than the year before. At the peak of the crisis, the decline in passengers was more than 90 per cent and the average annual decline remains at 40 per cent. This is in line with passenger numbers at the end of the 1980s.

Even at the worst point of the crisis, the ÖBB Rail Cargo Group delivered every tonne reliably and safely to its destination, both in Austria and throughout Europe as well all the way to Asia. The commitment to crisis management shown by the team in the 18 countries was particularly acknowledged in the customer satisfaction analysis. At the same time, in 2020 the RCG was able to achieve significant steps in the internationalisation and expansion of TransNET and lead the digitalisation initiative to its first interim success with the GO-Live of the digital assistant MIKE.

Lats year, EUR 2.6 billion s invested in the renewal and expansion of the railway infrastructure. Except for a few days, the 200 or so ÖBB-Infrastruktur construction sites were in full operation even during the Covid crisis, securing jobs throughout the supply chain. With the rail investment plan of EUR 17.5 billion adopted by the Federal Government last year, the largest investment package ever was also set into motion. This creates EUR 5 billion in value annually for Austria as a business location and secures or creates 15,000 jobs for every billion invested.