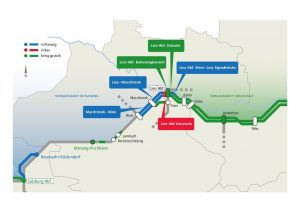 ÖBB will submit by the end of April the Environmental Impact Assessment (EIA) for four-track expansion project of the western route between Vienna and Linz. According to the current master plan, a total of EUR 338.1 million will be invested, excluding the Linz Franckviertel local transport hub.

In the future, travelers will benefit from a denser Linz-St.Valentin-Amstetten S-Bahn system, even more punctual trains and improved long-distance services.

The project for the environmental impact assessment (EIA) will be submitted to the Federal Ministry for Climate Protection, Environment, Energy, Mobility, Innovation and Technology (BMK) in April.

The four-track western line from Vienna to Linz Kleinmünchen is currently a double-track line which is not developed to four-tracks between Linz Kleinmünchen and Linz Signalbrücke representing a capacity bottleneck, mainly due to the proximity to Linz Central Station. The local and long-distance trains share the only two tracks that are intended for the western route and lose often valuable time by giving priority and crossing. 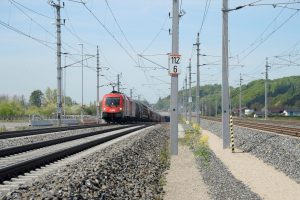 Even without the forecast increase in traffic on the western route, it is already the busiest as around 30% of all trains in Austria run on this route, which only makes up around 10% of the rail network. To optimise the operational processes in the future, a four-track expansion is necessary. This means that in future two tracks will only be available for long-distance traffic and two tracks only for local traffic. The trains will reach or leave the platforms at Linz Central Station or the marshalling stations without any time-consuming threading.

The EIA of the four-track expansion of the Linz marshalling yard (Vbf.) West – Linz Signalbrücke is the first approval stage, followed by further procedures by the Province of Upper Austria.

The construction works are expected to be performed from 2024 to 2030 and cover the complete renewal of the track systems, including the substructure, overhead lines, tracks, and switches while train operations continue. The route position remains almost unchanged.

Together with the project partners City of Linz and Province of Upper Austria, a new local transport hub is to be built as part of the project with the Linz Franckviertel stop, which will enable switching between trains on the West and Summerau route and Linz public transport system.

The necessary planning agreement for this local transport hub was recently passed.

By removing conflicting intersections, capacities on the western route can be sustainably increased and the local, long-distance and freight traffic expanded. In the future, customers will benefit from the increased quality of a denser access offer.

The Vienna – Linz route is now four-track, with the exception of a small section in the east of Linz, which results in an almost 20-minute reduction of the travel time between the two cities.