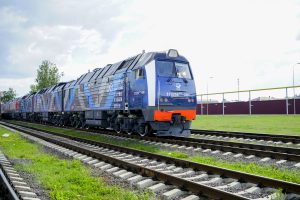 Under the contract signed in May 2021, the operator ordered six new freight locomotives, with a remaining batch of the other three expected to be delivered by the end of this year. The rolling stock manufacturer will also provide maintenance services for the delivered locomotives.

The locomotives are manufactured at Bryansk Machinery Plant, part of TMH.

Currently, the mining site operates Class 2TE116, 3TE10, TEM2, and TEM18 locomotives. In addition, in February 2021 TMH Industrial Solutions (TMH PRO) has leased to Elga-Trans two new Class TEM28 shunting locomotives together with drivers and full service. The maintenance and ongoing repairs of the fleet are conducted on the site by TMH PRO in cooperation with LocoTech-Promservis.

The three-section diesel freight locomotives are in commercial operation since early 2020. Over 50 of these locomotives are based in Komsomolsk-on-Amur Depot of the Far Eastern Railway. Their strong economic efficiency is a product of reduced fuel consumption and reduced fleet operation costs.

The mainline locomotive features a number of advanced engineering solutions, such as roller bearing wheel-motor block, microprocessor module driving system, AC electric motors in auxiliary systems, and screw compressor packages. The engine has a power reserve for extra reliability in the environment of low temperatures or high altitudes. The driving crews enjoy comfortable working conditions that comply with all modern health, safety, and ergonomics standards.