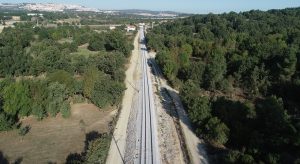 Infraestruturas de Portugal awarded a contract for the modernisation of Cerdeira – Vilar Formoso rail section part of the Beira Alta Line, on the Northern International Corridor.

The works under the EUR 43 million contract are expected to be completed within two years.

The modernisation of the 43 km section between Guarda – Vilar Formoso rail section will be carried out in two distinct phases. The first phase corresponds to the intervention works, which has already been concluded, for the complete renovation of the 14-km Guarda – Cerdeira subsection, and the second phase is related to the awarded contract covering 25 km of rail section.

The two contracts represent an estimated investment of EUR 52 million, out of the EUR 75 million foreseen for Guarda – Vilar Formoso, which includes materials, inspection, signalling and testing and certifications.

The project covers track rehabilitation, the installation of signalling and telecommunications systems, the reconstruction of the platforms at the existing stations and stops which comprises two different lengths and will be raised at 0.76 metres. The platforms for international and intercity services will be 200m – long, while the ones serving the regional train services will be 100m – long. Works also include layout remodeling of Cerdeira, Noémi and Vilar Formoso stations which must accommodate 750m – long freight trains.

The modernisation of Cerdeira – Vilar Formoso rail line has received European financing through the Connecting Europe Facility with a co-financing rate of 85%.

The project is part of the 2020 Railway Programme and complements the rehabilitation of the railway line between Guarda and Cerdeira which has been completed.

The 202-km Beira Alta Line is the shortest rail route between the Atlantic coast and Northern Europe, through France and its modernisation was included into the 2020 Railway Programme. As a priority project, the mainline needs investment to renew its infrastructure, increase the transport capacity and interoperability to enhance rail freight transport competitiveness.