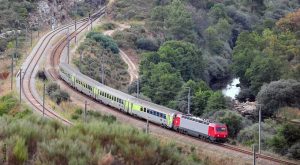 Infraestruturas de Portugal has launched a tender for Beira Alta line modernisation, which involves the Mangualde – Celorico da Beira rail section. EUR 103 million is the value of the tender which is also funded by the European Union.

The contract envisages the modernisation of 34 km rail section between Mangualde and Celorico da Beira, which also includes the replacement of the track superstructure and the modification of Gouveia and Fornos de Algodres stations’ layout, ensuring the crossing of 750-meter-long trains and the optimisation of operating conditions.

The rehabilitation works for drainage systems, construction of current works of art  such as the overpasses and underpasses, are also planned. I will be also needed some adaptations of the fixed installations of electric traction and the construction of basic infrastructures for signalling and telecommunication systems.

The modernisation of the railway section is part of the Beira Alta Line project included in the Ferrovia2020 national strategy.

The Beira Alta project is implemented under five contracts either under tender or in the contracting phase, with a total value of investment of EUR 430 million:

The modernisation of the 14 km section between Guarda and Cerdeira is already under construction, with an estimated investment of EUR 8.7 million.

The projects are of great importance for the modernisation of Portugal railway network as well as for the integration with Spain rail system, provided by the International North Corridor.

The Ferrovia2020 investment plan defines Porto / Aveiro – Vilar Formoso (Spanish Border) link, through the Beira Alta Line as a priority project that aims to strengthen the connection between the North and Centre of Portugal with Europe in order to make a more efficient rail freight transport, enhancing the increase of the competitiveness.

The contract for the Mangualde – Celorico da Beira section is part of the Aveiro and Vilar Formoso railway project – Beira Alta Line (Pampilhosa-Vilar Formoso), approved under the CEF Transport, with a co-financing rate of 85%.

Under the CEF 2015 call, the project has received a EUR 375.86 million European funding. The total eligible cost has a value of EUR 547.74 million.

The project included the detailed design studies and works for the upgrading of the Pampilhosa-Vilar Formoso section of the Beira Alta line (202 km). The upgraded interoperable link will allow the movement of up to 750 metres-long trains at an increased average reference speed of 100 km/h. Moreover, the line will be prepared for the installation of the UIC gauge in full synchrony with Spain and its overhead contact line will be adapted to ensure ITE compliance.