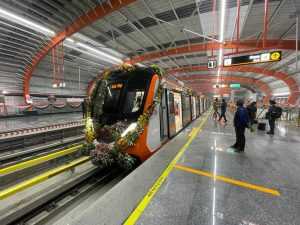 “Kanpur Metro is a remarkable boost for Kanpur’s infrastructure and an indication of our Government’s work culture of ensuring projects are completed fast,” Narendra Modi said.

The new metro section is 9 km long served by 9 stations and is part of the first corridor spanning 23.8 km IIT Kanpur to Naubasta area, in Dehat District. The 8.6 km second section will run from Chandrashekhar Azad Agriculture University to Barra, the extreme southern part of the city.  The second section is expected to connect Moti Jheel to Transport Nagar area running on an underground line.

The construction of the first section has been completed in two years. Kanpur Metro Rail project covers the construction of a 32 km long network comprising two corridors which were approved by the government. The system will have 30 stations, of which 18 elevated and 12 underground.

The metro system is operated by Movia three-car trains under a EUR 245 million contract covering the delivery of 67 trainsets for the Kanpur and Agra metro networks. The metro train for Kanpur has been unveiled in September 2021. In 2020, the EIB announced a loan of EUR 650 million to support the construction of the two metro corridors.

“Our government laid the foundation stone of Kanpur Metro. The first phase of Kanpur Metro has been inaugurated and work on Agra and Meerut Metro is in full swing. Metro service is also proposed in many other cities. Metro is being continuously expanded in Lucknow, Noida and Ghaziabad. The speed at which Metro work is happening in UP is unprecedented,” Narendra Modi said at the ceremony.