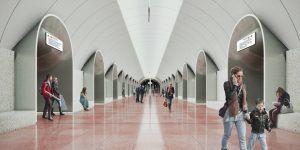 By the end of this year, the construction of nine more stations on the on eastern and northeastern sections of Moscow Big Circle Line will be completed, the Department of Transport has announced.

The Big Circle Line is currently 60% completed and will entirely in operation in 2023.

Due to the construction of three northeastern stations (Maryina Roscha, Rizhskaya and Sokolniki), the passengers will be able to make an interchange from these stations to Lines 1, 6 and 10, the Moscow Central Diameter 2 (the MCD), Rizhsky railway station and the surface transport.

The eastern section of the line is more than 50% completed and consists of four stations which provide connection to the Lines 7 and 10 of the Moscow Metro, the MCD2 and to the Biryulevskaya line which is currently under construction.

In addition, the BCL will include a section of the former Kakhovskaya line, which was closed for reconstruction in 2019. Kakhovskaya station is already opened, while the remaining two (Kashirskaya and Varshavskaya) are yet to be re-opened.

The new BCL stations are distinguished by their unusual design. For example, Maryina Roscha station will be one of the deepest in the Moscow Metro system. The length of escalators will be 130 metres, which is a record for the Moscow Metro. A decorative digital board in the form of an arch will be installed before exit from Rizhskaya station. The platform will be decorated with 12 more arches of metal up to four meters in height with built-in backlight.

Nagatinsky Zaton will have a 2-metre-high fish inhabiting the Moscow region sculpted in granite using the mosaic technique. The design of Sokolniki station will be dedicated to the history of the Moscow Metro with references to photos and billboards of 1940s and 1950s as well as works of Russian avant-garde artists including Malevich, Tatlin and Lissitzky.

“We are constantly working to improve transport accessibility. The full launch of the BCL will simplify the mobility of 3.3 million residents of 34 districts. In addition, the operating sections of the line have already improved transport services in 27 districts with 2.7 million inhabitants” Maksim Liksutov, the Deputy Mayor of Moscow for Transport said.

In December, Vladimir Putin has inaugurated a new BCL section serving the south and west regions of the city. Moscow Big Circle Line will be 70 km long with 31 stations and is expected to be completed in 2023.