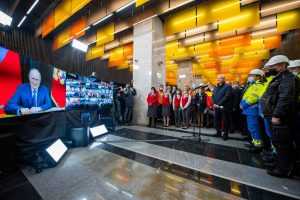 The President of the Russia Vladimir Putin and the Mayor of Moscow Sergey Sobyanin have opened a new section of Big Circle Line (BCL) in the South and West of the city.

“We launch passenger service on a new section of the Moscow Metro’s Big Circle Line. Indeed, for the first time in history of domestic metro engineering, ten stations are being launched at once. The new stations of the Big Circle Line will definitely considerably improve transport access to many parts in the west and south of Moscow,” Putin said during a videoconference ceremony on December 7.

The section is more than 21 km long and served by 10 stations connecting Mnyovniki and Kakhovkaya stations, running through the city’s Western, Southwestern and Southern administrative areas. In addition to new stations also includes a section of the Kakhovskaya line, currently under reconstruction.

The line will provide transport acces for residents of 11 districts of the city with 1.4 million inhabitants. Almost 450,000 people will have the BCL stations near the house. The opened Aminyevskaya station will provide connection to the future Moscow Central Diameter 4 (MCD4) through an underground passage.

The new section of Big Circle Line is the longest section in the history of the Moscow Metro launched for passengers at the same time. Currently, 44 km and 22 station of the BCL are operating. The BCL is expected to be completed by the beginning of 2023 when will have a total length of 70 km with 31 stations, which is 3.5 times longer than the existing Line 5 (the Circle Line). The full launch of the BCL will simplify the movement of 3.3 million Moscow citizens living in 34 districts