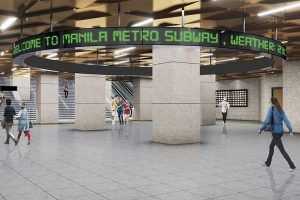 The contract is worth approximately JPY 140 billion (USD 1.2 billion) and is expected to be completed in 2028.

Mitsubishi is responsible for designing, manufacturing, installing and delivering of all the systems for the underground metro system linking the northern city of Valenzuela and the southern city of Parañaque. The company will deliver the integrated railway systems along 27 km of metro line and 15 stations from East Valenzuela Station to Terminal 3 Station which is connected to Ninoy Aquino International Airport Terminal 3.

The project also includes the construction of a train depot and four stations from East Valenzuela to North Avenue for which the main construction works were launched in 2019 and are expected to be completed this year.

Metro Manila Subway is estimated at USD 7 billion and is supported by the Japan International Cooperation Agency which has recently signed a new loan agreement for the financing of the first phase of the project. In December 2020, DOTr awarded Sumitomo and Japan Transport Engineering Company the contract for the supply of 240 train cars (30 eight-car metro trainsets) worth JPY 57.5 billion (USD 498.2 million). This contract is also supported by JICA.

The first phase of the metro network is expected to enter commercial operation in 2027 when passengers will travel 45 minutes between the cities of Valenzuela and Pasay.

This new line will help to meet Metro Manila’s growing demand for public transport, which has been driven by the city’s rapid economic growth. It will also help to reduce traffic congestion and atmospheric pollution, both of which are particularly severe in Metro Manila.