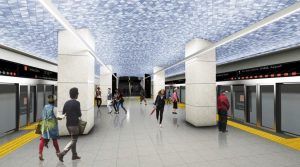 The Japan International Cooperation Agency (JICA) and the Government of Philippines signed a loan agreement for the first phase of Metro Manila subway project.

JPY 253.3 billion (USD 2.2 billion) is the value of the Japanese financing which will support the construction of 27 km metro line served by 15 underground stations.

The loan will be used for the construction of the stations, the underground tunnels between stations, a train depot and other public works. It will also support the procurement of rail systems and rolling stock, as well as the consulting services including tender assistance, construction supervision and Transit Oriented Development support.

The first phase covers the construction of a 25.3 km metro line connecting North and South of Manila running from Mindanao Avenue in Valenzuela City through the FTI in Taguig City and end at the Ninoy Aquino International Airport in Paranaque City. The main construction works started in December 2019 and are expected to be completed in 2025.

The Department of Transport has already used JPY 105 billion (USD 910 million) representing the first tranche provided by JICA under an agreement signed in 2018.

In July 2021 Philippines Foreign Affairs Secretary Teodoro and the Japanese Ambassador to the Philippines Koshikawa Kazuhiko signed an agreement for to formalise the second tranche of the loan for the first phase of the project.

Thus, the Japanese government has extended a JPY 253 billion (USD 2.3 billion) loan through the JICA for the completion of country’s first underground metro system. The current loan caps over the JPY1 trillion (USD 8.6 billion) aid package promised the two countries agreed in 2017.

Metro Manila subway network is the first underground transport system in the Philippines and comprises the construction of a 33.1 km metro system from Valenzuela City in the northern part of Metro Manila to Pasay City in the southern part, crossing through the Ninoy Aquino International Airport Terminal 3.

When completed in 2027, the metro system will accommodate up to 370,000 passengers per day in the first operational year and will answer increasing mobility needs while alleviating serious traffic congestion in Metro Manila.