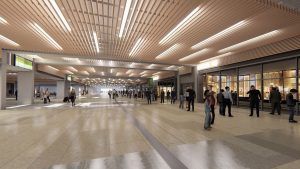 Adif AV has awarded the contract for Madrid Chamartín station (Madrid Chamartín – Clara Campoamor) covering expansion works, completely remodeling of its lobby as the construction of four additional tracks dedicated for high-speed traffic.
The winner of the EUR 207 million project is a consortium comprising Vías y Construcciones, Comsa, Azvi and Constructora San José which must complete the construction in 60 months (5 years).

The consortium will be responsible for works to adapt the station to the increase in traffic expected by the upcoming commissioning of new sections of the high-speed tracks, such as the standard-gauge tunnel that will be connected to the Madrid Puerta de Atocha station.

The expansion works includes the construction of four new tracks served by new platforms which will also be built to serve the high-speed trains. Following this project, the station will have a total of 25 tracks of which 12 will be standard-gauge tracks.

The station hall will be expanded to encompass and connect with the new tracks and platforms, which will be mounted to the east side, and will also be completely remodeled.

The remodeling work covers the construction of three different areas for passengers which include a boarding area for high-speed services, an area for Cercanías (the commuter rail network) with access through turnstiles and a common lobby in the form of a large longitudinal corridor.

This central corridor is designed as the heart of the station since it will be the main route of movement of passengers and users. Measuring 18 meters wide, it will have commercial areas on one side and the different boarding and waiting areas on the other side. The contract includes carrying out other complementary actions, such as the construction of an underground connection with the Cercanías lobby and with the Madrid metro system. It also includes the erection of a new technical building for high-speed installations at the north end of the station, and the execution of foundations and piers for the covering of tracks on the east side. This last action will support the future coverage of the station’s rail network, a work that is part of the Madrid Nuevo Norte project.

This contract is in addition to the others that are already being undertaken at the station to adapt the Cercanías tracks and convert tracks 14 and 15 to standard gauge, all to prepare it to accommodate a greater number of trains, offering increased capacity.

The future station will accommodate Cercanías, regional and long-distance services, both conventional and high-speed. The station will become the origin and destination for high-speed rail lines that connect Spain’s capital with the north and northwest of the country, while the Madrid Puerta de Atocha will serve the traffic for the southern and eastern corridors.

The standard-gauge tunnel that will soon connect the two stations in Madrid will allow the articulation of a single and transversal high-speed network, and the traffic for the southern and eastern corridors will be directed and stationed in Chamartín, to continue to the north and northwest, and vice versa. The EIB has proposed a EUR 740 million loan to support the construction of the EUR 1.48 billion tunnel project.

Madrid Chamartín station will also act as a terminus for high-speed services to Madrid-Bajaras Adolfo Suárez airport as in the first phase, Adif will adapt and transform the Cercanías tracks to accomodate high-speed traffic and later a new high-speed rail line will be constructed.

Under the project, the station and its urban surroundings will enter comprehensive remodeling transforming the station into an international and sustainable transport hub. The international design tender is underway.

The project will be financed by the European Union through the Next Generation EU.