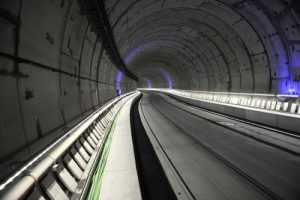 The European Investment Bank has proposed a EUR 740 million funding to Adif Alta Velocidad for Madrid railway node project which has a total estimated cost of EUR 1.48 billion.

The project comprises several schemes for capacity expansion of the two Madrid main stations, Atocha and Chamartín, and other measures with the aim of operating them as one hub with two terminals.

The project consists of the construction of a UIC gauge tunnel connecting Chamartín station (Mediterranean Corridor) with Atocha station (Atlantic Corridor) and the necessary adaptation works at both stations in order to eliminate the barriers in the transfer between both Corridors.

The project covers the construction of a 7.3 km tunnel of which 6.8 km were excavated using a tunnel boring machine from the Chamartín station.

Under the 2015 CEF Transport call, Adif AV has received EUR 1.1 million funding for the study development on the Madrid urban node, covering the second phase of complex of Atocha station, on the Sines/Lisboa – Madrid high-speed line. With a value of EUR 2.2 million, the study included some adaptions to the station such as a new ‘Estación Pasante’ containing 4 new underground high-speed tracks and 2 platforms, a new Arrivals Hall, new accesses and the construction of a new ‘Edificio de Servicios’.

Adif is currently addressing the project by implementing the second phase of the remodeling and expansion of Atocha station. This project is the continuation of a first phase undertaken in 2010 which consisted of the construction of the new arrival hall. The station will be adapted to more high-speed lines as well as a high passenger flow, allowing trains to enter and exit any corridor to stop at the station, optimising the integration of the network and services.

The project covers the construction two platforms and four high-speed tracks bringing the total number of the tracks to 25, from currently 21. Twelve of them are designed for standard gauge trains. Due to the lack of spaces, the tracks will be constructed underground under the current tracks 14 and 15 of the station and part of the street Méndez Álvaro.

In parallel to the previous actions, Adif is working on the comprehensive remodeling of the Chamartín station and its urban integration. This project is part of Madrid Nuevo Norte urban regeneration programme and is complemented by the coverage of the track of the station including the construction of a large park. The aim of this project covers the adaptation of the station to the new mobility trend and needs. The project aims to make the station a reference for the social and economic life of Madrid. This year, Adif authorised a EUR 250 million tender for the expansion and adaption of Chamartín station which includes the redesign of the lobby and the construction of other service spaces for passengers.

Once the project will be completed, it will allow trains to stop in Atocha and to run between Atocha and Chamartín stations using the new standard gauge rail tunnel.

The high-speed tunnel, which will deliver the ‘single station with two terminals’ concept, will connect the two stations running along the existing conventional tunnel used by commuter trains.

The project consists of an extension of capacity of the Madrid railway node to serve traffic growth in the coming years. Recently, Adif started the consultation for the construction of the high-speed access at the Madrid Barajas airport.

The Madrid railway node is located on the Core Trans-European Transport Network (TEN-T) Atlantic and Mediterranean Corridors and will provide increased capacity to serve the traffic growth in the coming years. The project will also reduce the congestion in the area, and thereby allow the expected traffic growth in the high-speed lines converging in Madrid, as well as in the Madrid suburban railway lines.