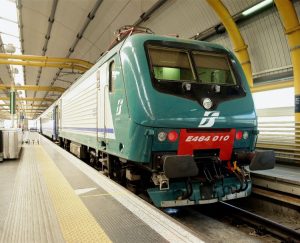 The loan with UniCredit is part of the wider transaction, for overall EUR 600 million, specifically structured by FS for the purpose to seize the interesting opportunities created by the ECB’s measures for the economy and the banking system, designed to create support to the European industrial economy.

EUR 300 million loan agreement with a 2 years tenor was signed with Intesa Sanpaolo. The loan for Trenitalia is part of bank’s wider transaction of EUR 600 million.

With a maximum power of 3.5 MW and a top-speed of 160 km/h, the E464 locomotive has a high level of reliability, availability and serviceability over its entire life cycle.

In 2009, Trenitalia awarded Bombardier a EUR 258 million contract for 100 additional Traxx E464 electric locomotives with an option for further 50 vehicles. The EUR 128 million option was exercised in 2011, when the orders included 688 E464 locomotives.

Bombardier is collaborating with Trenitalia for the supply of Frecciarossa 1000, with the latest order envisaging the supply of 14 very high-speed trains under a EUR 575 million contract signed in 2019. The two companies have also signed this April an agreement for integrated logistics services for ETR500 Frecciarossa components and spare parts.