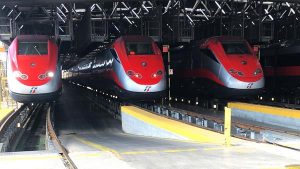 Bombardier Transportation and Trenitalia signed a contract for integrated logistics services to continue the deliveries of new and repaired components and spare parts for the fleet of ETR500 Frecciarossa very high-speed trains. The six-year contract has an option for 6 other additional years.

With this new contract, Bombardier will provide around 120 different components to Trenitalia within a 48-hour delivery time, including new, repaired and overhauled items. The contract includes critical components such as traction cooling equipment and transformers.

This is an important step in the ETR500 Frecciarossa fleet’s lifecycle as it enables Trenitalia to leverage the benefits of Bombardier’s service excellence acquired during its management of previous logistics and rolling stock maintenance contracts.

The 58 ETR500 Frecciarossa very high-speed trains for Trenitalia were manufactured by a consortium of Bombardier, Alstom and AnsaldoBreda.
The trains have been in service in Italy since the mid-1990’s and they have been operating under Frecciarossa brand since 2008.

“We are very pleased to continue our long-term collaboration with our customer Trenitalia with this new. This tailored contract will ensure continuous availability of consumable spare parts and repairable components for the ETR500 Frecciarossa fleet,” said Franco Beretta, the President of Bombardier Transportation Italy.
Bombardier has an extensive experience of delivering high-speed rail technology in Italy. In 2019, Hitachi Rail – Bombardier Transportation consortium was awarded a contract for the delivery of 14 Frecciarossa 1000 very high-speed trains. With a value of EUR 575 million, the contract also covers the provision of maintenance service for 10 years.

Through the contract, Trenitalia has a Frecciarossa 1000 fleet of 14 new very high-speed trains, manufactured in Italy. The trains have a capacity of 460 passengers each and they are able to run at speeds of 360 km/h.
In Italy, the Canadian-based company has 700 employees at its Vado Ligure production site, Rome signalling site and at service depots throughout the country, as well as a team based at the Rome Fiumicino Airport.